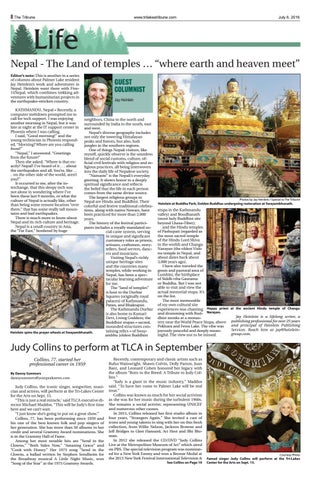 Nepal - The Land of temples … “where earth and heaven meet” Editor’s note: This is another in a series of columns about Palmer Lake resident Jay Heinlein’s work and adventures in Nepal. Heinlein went there with Five14Nepal, which combines trekking adventures with humanitarian projects in the earthquake-stricken country. KATHMANDU, Nepal – Recently, a computer meltdown prompted me to call for tech support. I was enjoying another morning in Nepal, but it was late at night at the IT support center in Phoenix where I was calling. I said, “Good morning!” and the young technician in Phoenix responded, “Morning? Where are you calling from?” “Nepal,” I answered. “Greetings from the future!” Then she asked, “Where is that exactly? Nepal? I’ve heard of it . . . about the earthquakes and all. You’re, like . . . on the other side of the world, aren’t you?” It occurred to me, after the interchange, that this sleepy tech was not alone in wondering where I’ve been these last 9 months, or what the culture of Nepal is actually like, other than being some remote location “over there,” that has some really tall mountains and bad earthquakes. There is much more to know about Nepal and its rich culture and heritage. Nepal is a small country in Asia, the “Far East,” bordered by huge

neighbors, China to the north and surrounded by India to the south, east and west. Nepal’s diverse geography includes not only the towering Himalayan peaks and forests, but also, lush jungles in the southern regions. One of things Nepali visitors, like myself, quickly observe is the seamless blend of social customs, culture, official civil festivals with religion and religious practices, all being interwoven into the daily life of Nepalese society. “Namaste” is the Nepali’s everyday greeting. It shows honor to a deeply spiritual significance and reflects the belief that the life in each person comes from the same divine source. The largest religious groups in Nepal are Hindu and Buddhist. Their colorful and festive traditional celebrations, along with native Newars, have been practiced for more than 2,000 years. The history of the festival participants includes a royally mandated social caste system, serving in unique and significant customary roles as priests, artisans, craftsmen, storytellers, food servers, dancers and musicians. Visiting Nepal’s richly unique heritage sites and the countries many temples, while working in Nepal, has been a spectacular learning adventure for me. The “land of temples” is host to the Durbar Squares (originally royal palaces) of Kathmandu, Patan, and Bhaktapur. The Kathmandu Durbar is also home to Kumari Devi, Living Goddess; the Buddhist stupas – sacred, mounded structures containing relics – of SwayHeinlein spins the prayer wheels at Swayambhunath. ambhu (oldest Buddhist

Photos by Jay Heinlein / Special to The Tribune

stupa in the Kathmandu valley) and Boudhanath (most holy Buddhist site beyond Lhasa-Tibet); and the Hindu temples of Pashupati (regarded as the most sacred temple of the Hindu Lord Shiva in the world) and Changu Narayan (the oldest Vishnu temple in Nepal, and about dates back about 3,000 years ago). I have also traveled the green and pastoral area of Lumbini, the birthplace of Siddhārtha Gautama or Buddha. But I was not able to visit and view the actual memorial stupa. It’s on the list. The most memorable of my own cultural site experiences was chanting Happy priest and drumming with Bud- Narayan. dhist monks at a monastery near the World Peace Stupa, above Pokhara and Fewa Lake. The vibe was joyously peaceful and deeply meaningful. The view not to be missed.

at the ancient Hindu temple of Changu

Jay Heinlein is a lifelong writer, a publishing professional for over 25 years and principal of Heinlein Publishing Services. Reach him at jay@heinleingroup.com.

Judy Collins to perform at TLCA in September Collins, 77, started her professional career in 1959 By Danny Summers dannysummers@yourpeaknews.com

Judy Collins, the iconic singer, songwriter, musician and actress, will perform at the Tri-Lakes Center for the Arts on Sept. 15. “This is just a real miracle,’ said TLCA executive director Michael Maddox. “This will be Judy’s first time here and we can’t wait. “I just know she’s going to put on a great show.” Collins, 77, has been performing since 1959 and his one of the best known folk and pop singers of her generation. She has more than 50 albums to her credit and several Grammy Award nominations. She is in the Grammy Hall of Fame. Among her most notable hits are “Send in the Clowns,” “Both Sides Now,” “Amazing Grace” and “Cook with Honey.” Her 1975 song “Send in the Clowns, a ballad written by Stephen Sondheim for the Broadway musical A Little Night Music, won “Song of the Year” at the 1975 Grammy Awards.

Recently, contemporary and classic artists such as Rufus Wainwright, Shawn Colvin, Dolly Parton, Joan Baez, and Leonard Cohen honored her legacy with the album “Born to the Breed: A Tribute to Judy Collins.” “Judy is a giant in the music industry,” Maddox said. “To have her come to Palmer Lake will be real treat.” Collins was known as much for her social activism as she was for her music during the turbulent 1960s. She remains a social activist, representing UNICEF and numerous other causes. In 2015, Collins released her first studio album in four years, “Strangers Again.” She invited a cast of icons and young talents to sing with her on this fresh collection, from Willie Nelson, Jackson Browne and Jeff Bridges to Glen Hansard, Ari Hest and Bhi Bhiman. In 2012 she released the CD/DVD “Judy Collins Live at the Metropolitan Museum of Art” which aired on PBS. The special television program was nominated for a New York Emmy and won a Bronze Medal at the 2013 New York Festival International Television &amp; See Collins on Page 10

Famed singer Judy Collins will perform at the Tri-Lakes Center for the Arts on Sept. 15. 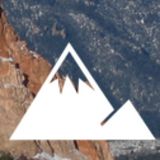