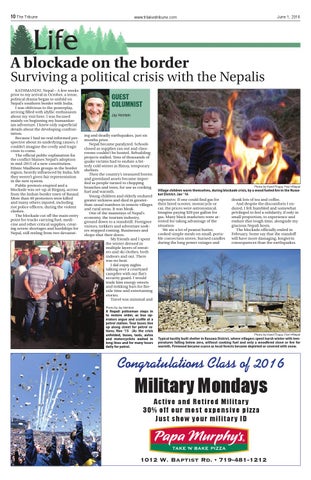 A blockade on the border

Surviving a political crisis with the Nepalis KATHMANDU, Nepal – A few weeks prior to my arrival in October, a tense, political drama began to unfold on Nepal’s southern border with India. I was oblivious to the powerplay, arriving filled with idyllic enthusiasm about my visit here. I was focused mainly on beginning my humanitarian adventure. I knew only superficial details about the developing confrontation. Because I had no real informed perspective about its underlying causes, I couldn’t imagine the costly and tragic crisis to come. The official public explanation for the conflict blames Nepal’s adoption in mid-2015 of a new constitution. Ethnic Madhesis groups in the border region, heavily influenced by India, felt they weren’t given fair representation in the new system. Public protests erupted and a blockade was set-up at Birgunj, across from the Indian border town of Raxaul. More than 40 protesters were killed and many others injured, including riot police officers, during the violent clashes. The blockade cut off the main entry point for trucks carrying fuel, medicine and other critical supplies, creating severe shortages and hardships for Nepal, still reeling from two devastat-

ing and deadly earthquakes, just six months prior. Nepal became paralyzed. Schools closed as supplies ran out and classrooms couldn’t be heated. Rebuilding projects stalled. Tens of thousands of quake victims had to endure a bitterly cold winter in flimsy, temporary shelters. Then the country’s treasured forests and greenland assets became imperiled as people turned to chopping branches and trees, for use as cooking fuel and warmth. Young children and elderly endured greater sickness and died in greaterthan-usual numbers in remote villages and rural areas. It was bleak. One of the mainstays of Nepal’s economy, the tourism industry, ground down to a standstill. Foreigner visitors, trekkers and adventure seekers stopped coming. Businesses and shops shut their doors. My friends and I spent the winter dressed in multiple layers of sweaters and ski clothes, both indoors and out. There was no heat. I did enjoy nights talking over a courtyard campfire with our flat’s security guard. I would trade him energy sweets and trekking bars for fireside time and entertaining stories. Travel was minimal and

Village children warm themselves, during blockade crisis, by a wood fueled fire in the Nuwakot District. Jan ‘ 16

expensive. If one could find gas for their hired scooter, motorcycle or car, the prices were astronomical. Imagine paying $20 per gallon for gas. Many black marketers were arrested for taking advantage of the situation. We ate a lot of peanut butter, cooked simple meals on small, portable convection stoves, burned candles during the long power outages and

drank lots of tea and coffee. And despite the discomforts I endured, I felt humbled and somewhat privileged to feel a solidarity, if only in small proportion, to experience and endure that tough time, alongside my gracious Nepali hosts. The blockade officially ended in February. Some say that the standoff will have more damaging, longterm consequences than the earthquakes.

A Nepali policeman steps in to restore order, as bus operators argue and scuffle at a petrol station. Tour buses line up along street for petrol rations; Nov ‘15 (As the crisis unfolded, buses, taxis, autos and motorcyclists waited in long lines and for many hours daily for petrol.

Typical hastily built shelter in Rasuwa District, where villagers spent harsh winter with temperatures falling below zero, without cooking fuel and only a woodfired stove or fire for warmth. Firewood became scarce as local forests became depleted or covered with snow.