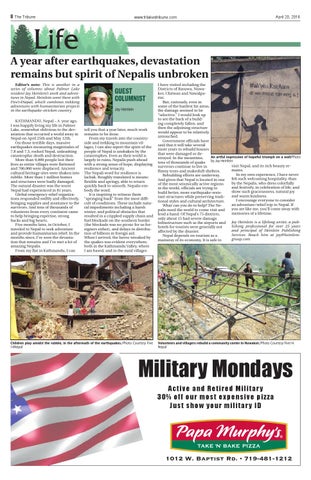 A year after earthquakes, devastation remains but spirit of Nepalis unbroken Editor’s note: This is another in a series of columns about Palmer Lake resident Jay Heinlein’s work and adventures in Nepal. Heinlein went there with Five14Nepal, which combines trekking adventures with humanitarian projects in the earthquake-stricken country. KATHMANDU, Nepal – A year ago, I was happily living my life in Palmer Lake, somewhat oblivious to the devastation that occurred a world away in Nepal on April 25th and May 12th. On those terrible days, massive earthquakes measuring magnitudes of 7.8 and 7.3, rocked Nepal, unleashing catastrophic death and destruction. More than 9,000 people lost their lives as entire villages were flattened and 700,000 were displaced. Ancient cultural heritage sites were shaken into rubble. More than 1 million homes and structures were badly damaged. The natural disaster was the worst Nepal had experienced in 81 years. Global emergency relief organizations responded swiftly and effectively, bringing supplies and assistance to the survivors. And tens of thousands of volunteers from every continent came to help bringing expertise, strong backs and big hearts. Five months later, in October, I traveled to Nepal to seek adventure and provide humanitarian relief. In the months since, I’ve seen the devastation that remains and I’ve met a lot of amazing Nepalis. From my flat in Kathmandu, I can

tell you that a year later, much work remains to be done. From my travels into the countryside and trekking to mountain villages, I can also report the spirit of the people of Nepal is unshaken by the catastrophes. Even as their world is largely in ruins, Nepalis push ahead with a strong sense of hope, displaying resilience and tenacity. The Nepali word for resilience is lachak. Roughly translated is means: flexible and springy, able to return quickly back to smooth. Nepalis embody the word. It is inspiring to witness them “springing back” from the most difficult of conditions. These include natural impediments including a harsh winter, and political obstacles that resulted in a crippled supply chain and fuel blockade on the southern border (the blockade was no picnic for us foreigners either), and delays in distribution of billions in foreign aid. When I arrived, the havoc wreaked by the quakes was evident everywhere, both in the Kathmandu Valley, where I am based, and in the rural villages

Children play amidst the rubble, in the aftermath of the earthquakes./Photo Courtesy Five 14Nepal

I have visited including the Districts of Rasuwa, Nuwakot, Chitwan and Nawalparisi. But, curiously, even in some of the hardest hit areas, the damage seemed to be “selective.” I would look up to see the back of a building completely fallen, and then the adjoining structure would appear to be relatively untouched. Government officials have said that it will take several more years to rebuild houses that were damaged or deAn artful expression of hopeful triumph on a wall/Photo stroyed. In the meantime, tens of thousands of quake by Jay Heinlein visit Nepal, and its rich beauty resurvivors continue to live in mains. flimsy tents and makeshift shelters. In my own experience, I have never Rebuilding efforts are underway. felt such welcoming hospitality, than And given that Nepal is located in one by the Nepalis, who dress colorfully of the most seismically active regions and festively, in celebration of life, and in the world, officials are trying to show such graciousness, natural joy build better, more earthquake-resisand warm kindness. tant structures while preserving tradiI encourage everyone to consider tional styles and cultural architecture. an adventure/relief trip to Nepal. If What can you do to help? The Neyou are like me, you’ll come away with palis need the world to come visit and memories of a lifetime. lend a hand. Of Nepal’s 75 districts, only about 15 had severe damage. Infrastructure such as the airports and Jay Heinlein is a lifelong writer, a publishing professional for over 25 years hotels for tourists were generally not and principal of Heinlein Publishing affected by the disaster. Services. Reach him at jay@heinleinNepal depends on tourism as a group.com mainstay of its economy. It is safe to