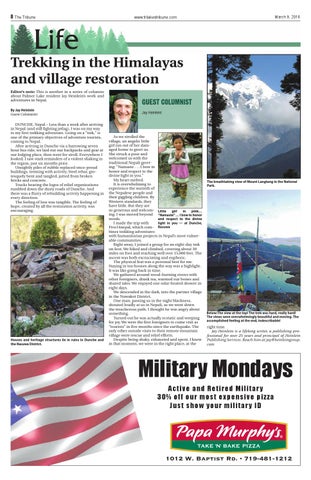 Trekking in the Himalayas and village restoration Editor’s note: This is another in a series of columns about Palmer Lake resident Jay Heinlein’s work and adventures in Nepal. By Jay Heinlein Guest Columnist

DUNCHE, Nepal – Less than a week after arriving in Nepal (and still fighting jetlag), I was on my way to my first trekking adventure. Going on a “trek,” is one of the primary objectives of adventure tourists, coming to Nepal. After arriving in Dunche via a harrowing seven hour bus ride, we laid out our backpacks and gear at our lodging place, then went for stroll. Everywhere I looked, I saw stark reminders of a violent shaking in the region, just six months prior. Unsightly piles of rubble replaced once-proud buildings, teeming with activity. Steel rebar, grotesquely bent and tangled, jutted from broken bricks and concrete. Trucks bearing the logos of relief organizations rumbled down the dusty roads of Dunche. And there was a flurry of rebuilding activity happening in every direction. The feeling of loss was tangible. The feeling of hope, created by all the restoration activity, was encouraging.

Houses and heritage structures lie in ruins in Dunche and the Rasuwa District.

As we strolled the village, an angelic little girl ran out of her damaged home to greet us. She struck a pose and welcomed us with the traditional Nepali greeting: “Namaste . . . I bow in honor and respect to the divine light in you.” My heart melted. It is overwhelming to experience the warmth of the Nepalese people and their giggling children. By Western standards, they have little. But they are so generous and welcom- Little girl in pink… ing. I was moved beyond “Namaste” … I bow in honor words. and respect to the divine light in you — at Dunche, I made the trip with Five14nepal, which com- Rasuwa bines trekking adventures with humanitarian projects in Nepal’s most vulnerable communities. Right away, I joined a group for an eight-day trek on foot. We hiked and climbed, covering about 30 miles on foot and reaching well over 15,000 feet. The ascent was both excruciating and euphoric. The physical feat was a personal best for me. Staying in tea-houses along the way was a highlight. It was like going back in time. We gathered around wood-burning stoves with other foreigners, drank tea, warmed our bones and shared tales. We enjoyed one solar-heated shower in eight days. We descended in the dark, into the partner village in the Nuwakot District. One man, passing us in the night blackness, shouted loudly at us in Nepali, as we went down the treacherous path. I thought he was angry about something. Turned out he was actually ecstatic and weeping for joy. We were the first foreigners to come visit as “tourists” in five months since the earthquake. The only other outside visits to their remote mountain village were rescue and relief efforts. Despite being shaky, exhausted and spent, I knew in that moment, we were in the right place, at the

The breathtaking view of Mount Langtang in the National Park.

Below:The view at the top! The trek was hard, really hard! The views were overwhelmingly beautiful and moving. The accomplished feeling at the end, indescribable!

right time. Jay Heinlein is a lifelong writer, a publishing professional for over 25 years and principal of Heinlein Publishing Services. Reach him at jay@heinleingroup. com