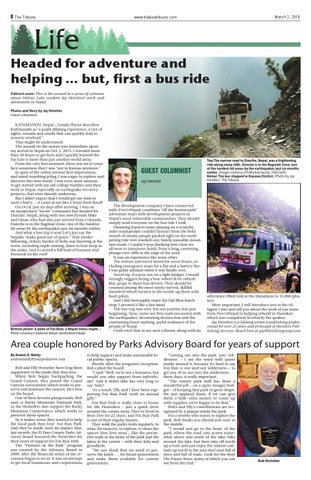 Headed for adventure and helping … but, first a bus ride Editor’s note: This is the second in a series of columns about Palmer Lake resident Jay Heinlein’s work and adventures in Nepal. Photos and Story by Jay Heinlein Guest columnist

KATHMANDU, Nepal – Lonely Planet describes Kathmandu as “a pupil-dilating experience, a riot of sights, sounds and smells that can quickly lead to sensory overload.” That might be understated. The assault on the senses was immediate upon my arrival in Nepal on Oct. 2, 2015. I traveled more than 30 hours to get here and I quickly learned the Far East is more than just another world away. From the very first moment, there was an in-yourface awareness that I was “not in Kansas anymore.” In spite of the rather intense first impressions, and mind-numbing jetlag, I was eager to explore and discover this new world. I was even more anxious to get started with my old college buddies and their work in Nepal, especially on earthquake-recovery projects, that were already underway. But I didn’t expect that I would get my wish in such a hurry ... it came at me like a Texas flash flood! On Oct 8, just six days after arriving, I was on an inexpensive “locals” commuter bus headed for Dunche, Nepal, along with two new friends Mike and Omar, who had also just arrived from Colorado. Dunche is in the Bagmati Zone, one of the hardesthit areas by the earthquakes just six months earlier. And what a bus trip it was! Let’s just say the Nepalis “make good use of space.” That smokebillowing, rickety bucket of bolts was bursting at the rivets, including triple-seating, three to four deep in the aisles. And it carried a full load of humans and livestock on the roof!

The development company I have connected with, Five14Nepal, combines “off the beaten path” adventure tours with development projects in Nepal’s most vulnerable communities. They should simply send everyone on the bus ride I took. Haunting Eastern tunes playing on a scratchy radio loudspeaker couldn’t distract from the bold stench of sweaty people packed tight on the teethjarring ride over washed-out, barely-passable mountain roads. I couldn’t stop thinking how close we all were to imminent death, from a long, careening plunge over cliffs at the edge of the road. It was an experience like none other. The torture and terror lasted for seven hours, including emergency stops for a flat and a battery fire. I was giddy jubilant when it was finally over. Travel tip, if you’re not on a tight budget, I would strongly suggest hiring a four-wheel drive vehicle. But, props to those bus drivers. They should be counted among the most steely-nerved, skillful daredevil wheel-turners in the world, up there with bush pilots. And I did thoroughly enjoy the Dal Bhat lunch stop. I savored it like a last meal. The bus trip was over, but our journey was just beginning. Next, came our first stark encounter with the earthquakes’ devastating destruction and the contrasting heart-melting, joyful resilience of the people of Nepal. I will cover that in my next column, along with an

Top:The narrow road to Dunche, Nepal, was a frightening ride along steep cliffs. Dunche is in the Bagmati Zone, one of the hardest-hit areas by the earthquakes just six months earlier. /Image courtesy of Erika Karmazsin, Trek Earth Below: The bus stopped in Rasuwa District. /Photo by Jay Heinlein / The Tribune

adventure-filled trek in the Himalayas to 15,000-plus feet. More important, I will introduce you to the villagers I met and tell you about the work of our team from Five14Nepal in helping rebuild in Nuwakot, which was completely leveled by the quakes. Jay Heinlein is a lifelong writer, a publishing professional for over 25 years and principal of Heinlein Publishing Services. Reach him at jay@heinleingroup.com

Area couple honored by Parks Advisory Board for years of support By Avalon A. Manly avalonmanly@yourpeaknews.com

Bob and Elly Hostetler have long been supporters of the parks that they love. When Bob began backpacking the Grand Canyon, they joined the Grand Canyon Association, which works to preserve and maintain the canyon. He’s now on the board. One of their favorite playgrounds, Bob said, is Rocky Mountain National Park, so the Hostetlers also support the Rocky Mountain Conservancy, which works to preserve those spaces. So it makes sense they wanted to help the local park they love: Fox Run Park. And they’ve made such an impact that, last month, the El Paso County Parks Advisory Board honored the Hostetlers for their years of support for Fox Run Park. The “Partners in the Park” program was created by the Advisory Board in 2009, after the financial strain of the recession began to set in. It was an attempt to get local businesses and corporations

to help support and make sustainable local public spaces. Shortly after the program’s inception, Bob called the board. “I said: ‘Well, we’re not a business, but would you take support from individuals?’ And it didn’t take her very long to say ‘Sure!’ “As a result, Elly and I have been supporting Fox Run Park (with an annual gift).” Fox Run Park is really close to home for the Hostetlers – just a quick drive around the corner away. They’ve lived in Bent Tree for 22 years, and Fox Run Park is one of their regular haunts. They walk the park’s trails regularly, to relax, for exercise, to explore, to share the spaces they love most – like the perimeter trails in the heart of the park and the lakes in the center – with their kids and grandkids. “We just think that we need to preserve the lands . . . for future generations and make them available for current generations.

“Getting out into the park, into ‘wilderness’ – I say the word with quote marks around it, because it’s hard to say Fox Run is out-and-out wilderness – to get any of us out into the wilderness . . . these days, is really important. “The county park staff has done a wonderful job – on a quite meager budget – of keeping that park in great shape. We just applaud them; if we can give them a little extra money to come up with supplies, we’re happy to do that.” Bob’s and Elly’s contributions are recognized by a plaque inside the park. For a newbie who wants to explore the park, Bob thinks you should just start in the middle. “I would just go to the heart of the park, where the road cuts across somewhat above and north of the lake, hike around the lake, but then take off north up a trail, and just enjoy the relative solitude up north in the area that’s just full of trees and full of trails. Look for the bent Ute Prayer Trees, many of which you can see from the trail.”