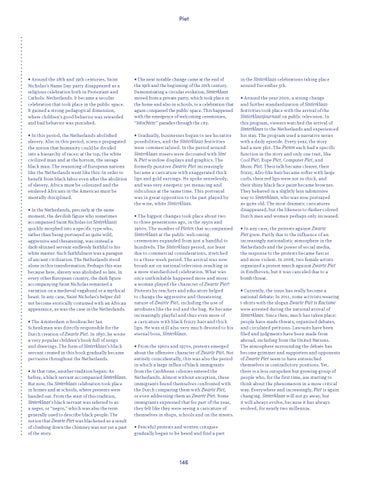 • Around the 18th and 19th centuries, Saint Nicholas’s Name Day party disappeared as a religious celebration both in Protestant and Catholic Netherlands. It became a secular celebration that took place in the public space. It gained a strong pedagogical dimension, where children’s good behavior was rewarded and bad behavior was punished.

• The next notable change came at the end of the 19th and the beginning of the 20th century. Demonstrating a circular evolution, Sinterklaas moved from a private party, which took place in the home and also in schools, to a celebration that again conquered the public space. This happened with the emergence of welcoming ceremonies, “intochten:” parades through the city.

• In this period, the Netherlands abolished slavery. Also in this period, science propagated the notion that humanity could be divided into a hierarchy of races: at the top, the white civilized man and at the bottom, the savage black man. The reasoning of European nations like the Netherlands went like this: In order to benefit from black labor even after the abolition of slavery, Africa must be colonized and the enslaved Africans in the Americas must be mentally disciplined.

• Gradually, businesses began to see lucrative possibilities, and the Sinterklaas festivities were commercialized. In the period around Sinterklaas streets were decorated with Sint & Piet window displays and graphics. The formerly punitive Zwarte Piet increasingly became a caricature with exaggerated thick lips and gold earrings. He spoke senselessly, and was very energetic yet menacing and ridiculous at the same time. This portrayal was in great opposition to the part played by the wise, white Sinterklaas.

• In the Netherlands, precisely at the same moment, the devilish figure who sometimes accompanied Saint Nicholas (or Sinterklaas) quickly morphed into a specific type who, rather than being portrayed as quite wild, aggressive and threatening, was instead a dark-skinned servant endlessly faithful to his white master: Such faithfulness was a paragon of ancient civilization. The Netherlands stood alone in this transformation. Perhaps this was because here, slavery was abolished so late. In every other European country, the dark figure accompanying Saint Nicholas remained a variation on a medieval vagabond or a mythical beast. In any case, Saint Nicholas’s helper did not become exotically costumed with an African appearance, as was the case in the Netherlands. • The Amsterdam schoolteacher Jan Schenkman was directly responsible for the Dutch creation of Zwarte Piet. In 1850, he wrote a very popular children’s book full of songs and drawings. The form of Sinterklaas’s black servant created in this book gradually became pervasive throughout the Netherlands. • At that time, another tradition began: As before, a black servant accompanied Sinterklaas. But now, the Sinterklaas celebration took place in homes and at schools, where presents were handed out. From the start of this tradition, Sinterklaas’s black servant was referred to as a neger, or “negro,” which was also the term generally used to describe black people. The notion that Zwarte Piet was blackened as a result of climbing down the chimney was not yet a part of the story.

• The biggest changes took place about two to three generations ago, in the 1950s and 1960s. The number of Pieten that accompanied Sinterklaas at the public welcoming ceremonies expanded from just a handful to hundreds. The Sinterklaas period, not least due to commercial considerations, stretched to a three-week period. The arrival was now broadcast on national television resulting in a more standardized celebration. What was once unthinkable happened more and more: a woman played the character of Zwarte Piet! Protests by teachers and educators helped to change the aggressive and threatening nature of Zwarte Piet, including the use of attributes like the rod and the bag. He became increasingly playful and thus even more of a caricature with black frizzy hair and thick lips. He was still also very much devoted to his eternal boss, Sinterklaas. • From the 1960s and 1970s, protests emerged about the offensive character of Zwarte Piet. Not entirely coincidentally, this was also the period in which a large influx of black immigrants from the Caribbean colonies entered the Netherlands. Almost without exception, these immigrants found themselves confronted with the Dutch comparing them with Zwarte Piet, or even addressing them as Zwarte Piet. Some immigrants expressed that for part of the year, they felt like they were seeing a caricature of themselves in shops, schools and on the streets. • Peaceful protests and written critiques gradually began to be heard and find a part

in the Sinterklaas celebrations taking place around December 5th. • Around the year 2000, a strong change and further standardization of Sinterklaas festivities took place with the arrival of the Sinterklaasjournaal on public television. In this program, viewers watched the arrival of Sinterklaas to the Netherlands and experienced his stay. The program used a narrative series with a daily episode. Every year, the story had a new plot. The Pieten each had a specific function in the story and only one trait, like Cool Piet, Rope Piet, Computer Piet, and Music Piet. Their talk became clearer, their frizzy, Afro-like hair became softer with large curls, their red lips were not so thick, and their shiny black face paint became browner. They behaved in a slightly less submissive way to Sinterklaas, who was now portrayed as quite old. The most dramatic caricatures disappeared, but the likeness to darker-colored Dutch men and women perhaps only increased. • In any case, the protests against Zwarte Piet grew. Partly due to the influence of an increasingly nationalistic atmosphere in the Netherlands and the power of social media, the response to the protests became fiercer and more violent. In 2008, two female artists organized a protest march against Zwarte Piet in Eindhoven, but it was canceled due to a bomb threat. • Currently, the issue has really become a national debate: In 2011, some activists wearing t-shirts with the slogan Zwarte Piet is Racisme were arrested during the national arrival of Sinterklaas. Since then, much has taken place: people have made threats, organized debates, and circulated petitions. Lawsuits have been filed and judgments have been made from abroad, including from the United Nations. The atmosphere surrounding the debate has become grimmer and supporters and opponents of Zwarte Piet seem to have entrenched themselves in contradictory positions. Yet, there is a less outspoken but growing group of people who, for the first time, are starting to think about the phenomenon in a more critical way. Everywhere and increasingly, Piet is again changing. Sinterklaas will not go away, but it will always evolve, because it has always evolved, for nearly two millennia. 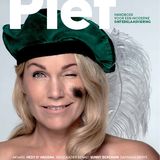