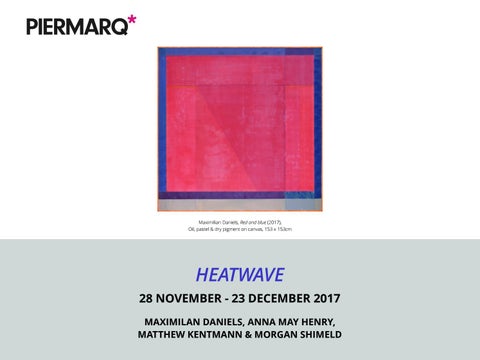 This Summer, Piermarq is going to turn up the heat with new work by some of the hottest rising stars of the Sydney art scene. Heatwave is visually striking, bold and colourful, incorporating works across a number of styles and mediums. The exhibition explores the vibrant hues and shades that embody the summer season. Maximilian Daniels throws himself into process, creating work that examines colour and its relationship to gesture and materiality. His soughtafter works manifest by painting multiple layers oil paint over a period of many months. Daniels' creates delicate, complex surfaces, that emerge over time and examine the subtleties of colour.    Anna May Henry's latest work is inspired by native ﬂora discovered on a recent art adventure to the beating heart of our country. From Alice Springs, Henry journeyed into the Western Desert, one of the harshest environments on the planet. Her paintings capture small moments of beauty in the relentless desert heat. Matthew Kentmann's subtle sky-scapes are motivated by his immediate environment that backs onto the Ku-ring-gai National Park, bordering the northern limits of Sydney’s sprawl. White Heat (2017) captures the dreamy, yet unsettling tones that set the sky alight in bush ﬁre season.   Morgan Shimeld's is a sculptor of immense talent with works characterised by attention to structure and form. His sculptures incorporate cast, welded and fabricated bronze and steel; manifested in luminous, ﬁery colours of the sunburnt landscape.   Join us in celebration of these up-and-coming talents and a classic Sydney summer season to come.   Heatwave opens on Tuesday 28 November 2017, 6 - 8pm and runs until 23 December 2017.

MAXIMILIAN DANIELS Maximilian Daniels (b. 1991) is an emerging Australian Artist living and working in Sydney, NSW. Daniels' completed his artistic training at UNSW ART & Design in Sydney, where he ﬁnalised a double degree, one being his Bachelor of Arts in painting and drawing. His practice is an ongoing investigation into abstract painting and techniques used to construct an abstract image. His practice involves and interrogates traditional notions of observation, representation and technique. Maximilian Daniels’ work draws upon the repeated processes and materiality of painting; mixing of colour, composition of the painting ground, layering of surface, and the application of the mark to develop visual observations of the action of painting itself. Through repeating techniques used in his practice Daniels creates work that examines colour and its relation to gesture and materiality in painting. By sequentially layering colour, Daniels creates delicate complex surfaces that emerge over time and examine the subtleties of colour. Each layer of material, primer and paint is visible as part of the superﬁcial surface of the ﬁnal image. The result is an image that holds both depth and ﬂatness, and its own form of “temporal perspective”. The inherent materiality of Maximilian Daniels’ work challenges and deconstructs commonly accepted notions of what constitutes an image. Although very much informed by the process of observation and representation, the ﬁnal image is devoid of all ﬁgurative imagery. Through using each process and material as both subject and substance for creating the image, Daniels elucidates a novel approach to the ‘image’ and the painting process.

ANNA MAY HENRY Anna May Henry (b. 1995) is a Sydney-based painter and a promising recent graduate from the National Art School, Sydney. Henry's practice centres on still life painting from an observation-based studio practice. Her paintings focus on native Australian ďŹ&#x201A;ora and reďŹ&#x201A;ect her interest in the unique aesthetics, sense of identity and symbolism of the Australian landscape. Her paintings play with markmaking and a diversity of paint application that negotiate the fundamentals of painting.

MATTHEW KENTMANN Born in London in 1977, Matthew Kentmann (b. 1977) is a Sydney-based artist. Kentmann has held solo exhibitions in Sydney and Melbourne and was a ﬁnalist in the 2014 Hornsby Art Prize, the 2011 and 2003 Dobell Prize for Drawing and the 2006 Redlands Westpac Art Prize. Matthew Kentmann on his practice; "I am motivated by my immediate environment that backs onto National Park, NSW. Nature, particularly the daily visits from a variety of birds informed my last three exhibitions. The birds beautifully break the formal elements of the landscape or painting and create movement in an otherwise static medium. Furthermore I feel connected via subject to the history of painting. Velazquez, Turner and Van Gogh depicted birds as did artists closer to home such as Sidney Nolan and Brett Whiteley.” The latter noting; "People ask me 'why paint birds?' and I look at them dumbfounded! I’ve got no answer, except that they are the most beautiful creatures" – Brett Whiteley Matthew Kentmann has an ongoing interest in portraiture. He has been a semiﬁnalist in the Doug Moran National Portrait Prize (2012, 2015 and 2016) and was a ﬁnalist in the Archibald Prize with his portrait of fellow artist Nigel Milsom, in 2015. Kentmann and Milsom ﬁrst met in the late 1990s when they were students at the College of Fine Arts in Sydney, and have remained close friends since. "I work with subjects that resonate with me," he says. "The thing that’s going to lift a particular work will be the relationship between the artist and the subject."

MORGAN SHIMELD The work of Sydney based sculptor, Morgan Shimeld (B. 1978-), is primarily concerned with the aesthetic and theoretical concepts of modernist architecture and design. Shimeld’s work, characterised by attention to structure and form, incorporates cast, welded and fabricated bronze and steel. In 2000, Shimeld graduated with a Bachelor of Visual Arts, from the University of Sydney, Sydney College of the Arts. Shimeld has been a ﬁnalist in a number of prestigious art prizes including: The Mt Buller Sculpture Award 2013, The Montalto Sculpture Prize 2013, Sculpture at Scenic World 2013, Willoughby Sculpture Prize 2011, The UWS Acquisitive Sculpture Award and Exhibition 2010, The Deakin Deakin University Contemporary Small Sculpture Award 2010, The Sawmillers Reserve Sculpture Prize 2010, and Sculpture by the Sea 2009. Shimeld’s work has been sought after by many private collectors and has also been acquired by Artbank Australia. This Summer, Piermarq is going to turn up the heat with new work by some of the hottest rising stars of the Sydney art scene.

This Summer, Piermarq is going to turn up the heat with new work by some of the hottest rising stars of the Sydney art scene.