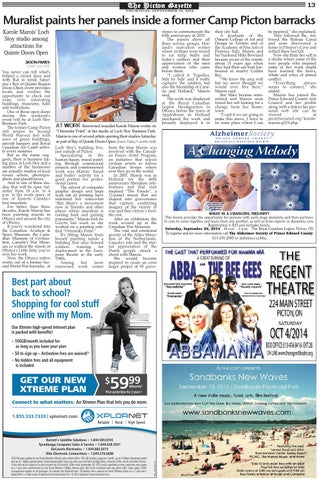 You never can tell what&#39;s behind a closed door and with that in mind, Saturday&#39;s Bay of Quinte Region Doors Open event provides locals and visitors the opportunity to check out some very interesting buildings, museums, halls and institutions. One of those open doors during this weekend&#39;s event will be at Loch Sloy Business Park. The former Camp Picton still retains its Second World War-era feel with rows of green buildings, aircraft hangers and Royal Canadian Air Cadet activity every summer. But as the name suggests, there is business taking place at Loch Sloy and a number of the businesses are actually studios of local visual artists, photographers and glassblowers. And in one of those studios that will be open Saturday from 10 a.m. to 4 p.m. Is the work space of one of Eastern Canada&#39;s best muralists. For better than three decades, Karole Marois has been painting murals in Ottawa and around the city of Ottawa. If you&#39;ve wandered into the Canadian Aviation &amp; Space Museum, the Canadian Museum of Civilization, Canada&#39;s War Museum or walked the streets of Ottawa&#39;s Little Italy, you&#39;ve seen her work. Now, the Ottawa native works out of a former Second World War barracks, at

at work Renowned muralist Karole Marois works on “Ostrander Point” at her studio at Loch Sloy Business Park. Marois is one of several artists opening their studios Saturday as part of Bay of Quinte Doors Open. (Jason Parks/Gazette staff)

Loch Sloy&#39;s building five, just outside of Picton. Specializing in the human figure, mural painting through commercial projects and commissioned work was Marois&#39; &#39;bread and butter&#39; activity for a good portion her professional career. The advent of computer graphic design and large scale ink jet printing have sidelined her somewhat “But there&#39;s a movement now in Toronto and other places where muralism is coming back and gaining popularity,” Marois told the Gazette last week as she worked on a painting entitled “Ostrander Point.” It&#39;s fitting Marois finds herself painting inside a building that once housed soldiers training for deployment in the European theatre in the early 1940s. Among her more renowned work comes

from the time Marois was involved with the Canadian Forces Artist Program, an initiative that selects civilian artists to follow Canadian troops where ever they go in the world. In 2005, Marois was in Holland for the 60th anniversary liberation celebrations and that visit inspired “The Parade”, a 13-panel mural that are shaped into gravestones that capture conflicting imagery of the victory of war and that victory&#39;s terrible cost. After an exhibition, the work wound up at the Canadian War Museum. The visit and emotional gravity of the Allies liberation of the Netherlands, Canada&#39;s role and the eternal appreciation of the Dutch people struck a chord with Marois. She would become inspired to create an even larger project of 65 grave-

Best part about back to school? Shopping for cool stuff online with my Mom. Our Xtreme high-speed Internet plan is packed with benefits! $ 100GB/month included for as long as you have your plan $ $0 to sign up – Activation fees are waived! 3 $ No hidden fees and all equipment is included

GET OUR NEW XTREME PLAN

stones to commemorate the 65th anniversary in 2010. The panels show all three service groups, Holland&#39;s starvation winter where civilians were forced to eat tulip bulbs and today&#39;s soldiers and their appreciation of the men and women who came before them. “I called it &#39;Together, Side by Side&#39; and it really captures the soldiers but also the friendship of Canada and Holland,” Marois said. The work was displayed at the Royal Canadian Legion Headquarters in Ottawa before the town of Appledoorn in Holland purchased the work and proudly displayed it in

their city hall. A graduate of the Ontario College of Art and Design in Toronto and of the Academy of Fine Arts of Florence Italy, Marois and her husband Mike Bowland became aware of the county about 15 years ago when they had their sail boat harboured in nearby Collins Bay. “We knew the area well but we never thought we would ever live here,” Marois said. But Mike became semiretired and Marois soon found her self looking for a change from her hometown. “I said if we are going to make this move, I have to be some place where I can

be inspired,” she explained. They followed the followed the Rideau Canal and soon discovered a home in Prinyer&#39;s Cove and settled there last fall. Now she finds her self in a studio where some of the very people who inspired some of her work might have learned the hows, whats and whys of armed conflict. “Everything always seems to connect,” she added. Marois has joined the Prince Edward County Arts Council and her profile along with a link to her personal web site can be viewed at pecartscouncil.org/karolemarois-p219.php.

WHAT IS A CHANGING MELODY? WHAT ISfor A persons CHANGING MELODY? This forum provides the opportunity with early-stage dementia and their partners This and forum opportunity for persons in care to come together learnprovides from one the another, as well as from experts in dementia care. Registration is $25 and includes with early-stage dementia and their lunch. partners in care Saturday, September 20, 2014 10 a.m. 3 p.m.from The one Royalanother, Canadian as Legion Picton, ON to come together and -learn To register and forwell moreas information call The of Prince Edward County from experts in Alzheimer dementia Society care. Registration 613-476-2085 alzheimer.ca/bhq is $25 andorincludes lunch. More from The Picton Gazette