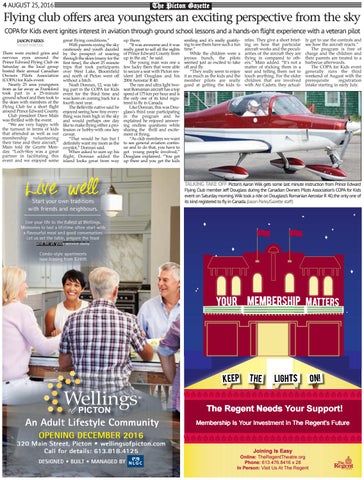 There were excited grins and nervous eyes around the Prince Edward Flying Club on Saturday as the local group hosted their annual Canadian Owners Pilots Association (COPA) for Kids event. Nearly 25 area youngsters from as far away as Frankford took part in a 25-minute ground school and then took to the skies with members of the Flying Club for a short flight around Prince Edward County. Club president Dave Main was thrilled with the event. â&amp;#x20AC;&amp;#x153;We are very happy with the turnout in terms of kids that attended as well as out membership volunteering their time and their aircraft,â&amp;#x20AC;? Main told the Gazette Monday. â&amp;#x20AC;&amp;#x153;Loch-Sloy was a great partner in facilitating this event and we enjoyed some

great flying conditions.â&amp;#x20AC;? With parents eyeing the sky cautiously and youth dazzled by the prospect of soaring through the skies (many for the first time), the short 25 minute trips that took participants over West Lake, Bloomfield and north of Picton went off without a hitch. Noah Donnan, 12, was taking part in the COPA for Kids event for the third time and was keen on coming back for a fourth next year. The Belleville native said he enjoyed seeing how tiny everything was from high in the sky and would perhaps one day like to make flying either a profession or hobby-with one key caveat. â&amp;#x20AC;&amp;#x153;That would be fun but I definitely want my mom as the co-pilot,â&amp;#x20AC;? Donnan said. When asked to sum up his flight, Donnan added the island looks great from way

up there. â&amp;#x20AC;&amp;#x153;It was awesome and it was really great to sell all the sights of Prince Edward County from up in the air,â&amp;#x20AC;? he said. The young man was one a few lucky fliers that were able to secure a seat with Picton resident Jeff Douglass and his 2004 Aerostar R 40. The rare and ultra light twoseat Romanian aircraft has a top speed of 175 km per hour and is the only one of its kind registered to fly in Canada. Like Donnan, this was Douglass&#39;s third year participating in the program and he explained he enjoyed answering endless questions while sharing the thrill and excitement of flying. â&amp;#x20AC;&amp;#x153;As club members we want to see general aviation continue and to do that, you have to get young people involved,â&amp;#x20AC;? Douglass explained. â&amp;#x20AC;&amp;#x153;You get up there and you get the kids

smiling and it&#39;s really gratifying to see them have such a fun time.â&amp;#x20AC;? While the children were a joyous bunch, the pilots seemed just as excited to take off and fly. â&amp;#x20AC;&amp;#x153;They really seem to enjoy it as much as the kids and the member pilots are really good at getting the kids to

relax. They give a short briefing on how that particular aircraft works and the peculiarities of the aircraft they are flying in compared to others,â&amp;#x20AC;? Main added. â&amp;#x20AC;&amp;#x153;It&#39;s not a matter of sticking them in a seat and telling them not to touch anything. For the older children that are involved with Air Cadets, they actual-

ly get to use the controls and see how the aircraft reacts.â&amp;#x20AC;? The program is free of charge and the children and their parents are treated to a barbecue afterwards. The COPA for Kids event generally runs the third weekend of August with the prerequisite registration intake starting in early July.

Start your own traditions with friends and neighbours.

Live your life to the fullest at Wellings. Memories to last a lifetime often start with a flavourful meal and good conversation. Let us set the table, prepare the feast and be at your service daily. Condo-style apartments now leasing from $2495

MEMBERSHIP MBERSHIP MAT MATT TERs YOUR ME YOU ERs

Your Support! The Regent Needs Your

An independent and locally owned newspaper in Prince Edward County established in 1830.