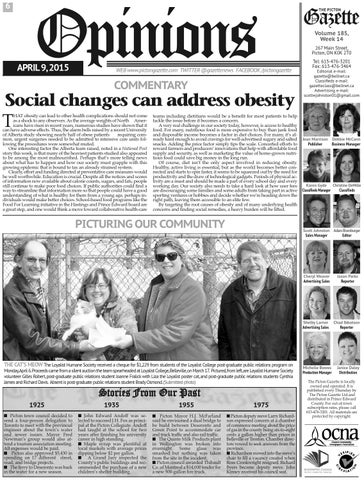 HAT obesity can lead to other health complications should not come as a shock to any observers. As the average weights of North Americans have risen in recent years, numerous studies have shown that it can have adverse effects. Thus, the alarm bells raised by a recent University of Alberta study showing nearly half of obese patients requiring common, urgent surgeries needed to be admitted to intensive care units following the procedures were somewhat muted. One interesting factor the Alberta team raised, noted in a National Post story this week, is that many of the heaviest patients studied also appeared to be among the most malnourished. Perhaps that’s more telling news about what has to happen and how our society must grapple with this growing epidemic that is bound to tax an already strained system. Clearly, effort and funding directed at preventative care measures would be well worthwhile. Education is crucial. Despite all the notices and scores of information now available about calorie counts, sugars, and fats, people still continue to make poor food choices. If public authorities could find a way to streamline that information more so that people could have a good understanding of what is healthy for them from a young age, perhaps individuals would make better choices. School-based food programs like the Food For Learning initiative in the Hastings and Prince Edward board are a great step, and one would think a move toward collaborative health-care

teams including dietitians would be a benefit for most patients to help tackle the issue before it becomes a concern. A very real challenge in our society today, however, is access to healthy food. For many, nutritious food is more expensive to buy than junk food and disposable income becomes a factor in diet choices. For many, it’s already hard enough to avoid cravings for well-advertised sugary and salted snacks. Adding the price factor simply tips the scale. Concerted efforts to reward farmers and producers’ innovations that help with affordable food supply and security, as well as marketing the value of home-grown nutritious food could save big money in the long run. Of course, diet isn’t the only aspect involved in reducing obesity. Healthy, active living is essential, but as the world becomes better connected and starts to spin faster, it seems to be squeezed out by the need for productivity and the draw of technological gadgets. Periods of physical activity are a must and should be made a part of every school day and every working day. Our society also needs to take a hard look at how user fees are discouraging some families and some adults from taking part in active sporting ventures or hobbies and decide whether we’re heading down the right path, leaving them accessible to an elite few. By targeting the root causes of obesity and of many underlying health concerns and finding social remedies, a heavy burden will be lifted.

Stories From Our Past n Picton town council decided to send a four-person delegation to Toronto to meet with the provincial engineer about the town’s water and sewer issues. Mayor Fred Newman’s group would also attend a tourism association meeting. All expenses would be paid. n Picton also approved $5,430 in spending on 17 different street, road, and bridge projects. n The ferry to Deseronto was back in the water for a new season.

n John Edward Andoff was selected to succeed J.H. Fox as principal at the Picton Collegiate. Andoff had taught at the school for two years after finishing his university career in high standing. n Maple syrup was plentiful at local markets with average prices dipping below $2 per gallon. n A Grand Jury inspected the County’s public buildings and recommended the purchase of a new children’s shelter building.

n Picton Mayor H.J. McFarland said he envisioned a dual bridge to be build between Deseronto and Green Point to accommodate car and truck traffic and also rail traffic. n The Quinte Milk Products plant in Wellington was broken into overnight. Some glass was smashed but nothing was taken from the site in the incident. n Picton council awarded Thibault Co. of Montreal a $14,000 tender for a new 500-gallon fire truck.

n Picton deputy reeve Larry Richardson expressed concern at a chamber of commerce meeting about the price of gas in the county being six-to-eight cents a gallon higher than prices in Belleville or Trenton. Chamber directors vowed to seek answers from the province. n Richardson moved into the reeve’s chair to fill a vacancy created when Ross Cronkwright resigned. Richard Byers became deputy reeve. John Kinney received his council seat.

The Picton Gazette is locally owned and operated. It is published every Thursday by The Picton Gazette Ltd.and distributed in Prince Edward County. For out-of-town subscription rates, please call 613-476-3201. All materials are protected by copyright.