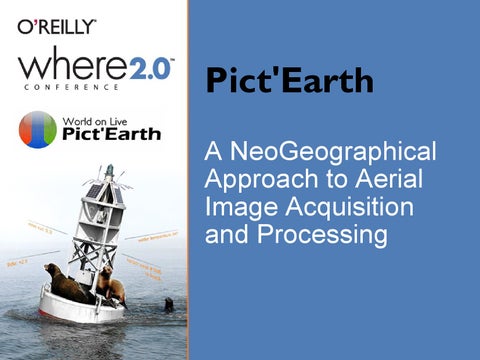 Pict'Earth A NeoGeographical Approach to Aerial Image Acquisition and Processing

Pict’Earth is a globally distributed team of GIS, Image Processing and Web professionals with a shared passion for High Definition Aerial Imaging. Since the advent of Virtual Globe Software including Google Earth, the team has taken a new direction. Beyond stunning 3D views and world wide image coverage, these applications and web services offer a platform previously only available to large companies and the military. Pict’Earth seeks to enable the geo community to do their own aerial imagery acquisition by developing easy to use client applications, and provide a platform in the cloud which performs basic image processing and rapidly delivers the resulting data in an easy to use way. Pict’Earth technology is based on Live Aerial Image Acquisition, Processing and Delivery.

A quick look back at Aerial ‘NeoGeography’

To cover larger areas, the system can easily be mounted on a popular planes like Cessnas or Ultralights. The Imaging and GPS devices are connected directly to a laptop in the cockpit via USB. The whole set of gear fits in a backpack and is ready to run within 10 minutes.

Pict’Earth LiveProcessing Applications use the latitude, longitude, altitude, surface elevation and bearing to calculate a “geoprint” for each captured image and display this in real time in Google Earth. These geoprint polygons are then filled with live low resolution video captures.

The resulting spatial resolution is a function of the platforms height above the surface and the focal length of the camera. As the plane is closer to the ground the image â&#x20AC;&#x2DC;geoprintsâ&#x20AC;&#x2122; cover less area, but are higher resolution.

Pictâ&#x20AC;&#x2122;Earth LiveProcessing Mobile performs this same operation in a single smartphone device. A KML file and geotagged images are generated during flight which can be loaded into a Virtual Globe once on the ground. Images and associated geodata can also be transferred to remote servers over GPRS/EDGE/3G/WiFi in flight dependent on an available network.

From a series of raw geoprint calculated images, a mosaic is constructed by applying lens correction, selecting ground control points, warping, merging and blending the output. The output is a georeferenced image file that can be loaded into traditional GIS packages or served to web browser or virtual globe clients.

Posidonia Algae Mapping in the Mediterranean Sea. Using Pict'Earth you have the flexibility you need to do the job when optimal environmental conditions are met.

Flood Events in Southern France 2003 Provides a rapid tool to collect, process and integrate images in the decision process and not just in the after crisis reporting process.

Keep track of urban development, linked with other GIS data

Can operate in dense urban area and report

Specific events : a look from above

Images are no longer a simple background, they become a source of information. Aerial Image Geodata is like any other source of information, its value is determined by its  Accuracy  Freshness  Flexibility Pict'Earth Empowers users to create their own site specific base maps Thank you for your attention