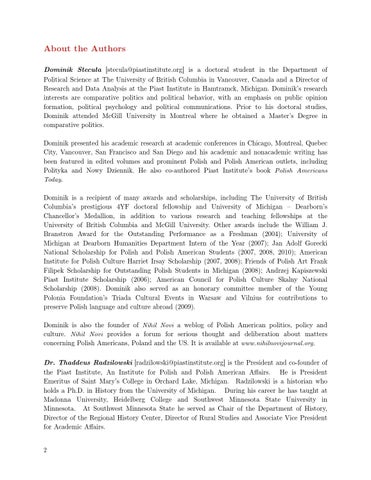 About the Authors Dominik Stecuła [stecula@piastinstitute.org] is a doctoral student in the Department of Political Science at The University of British Columbia in Vancouver, Canada and a Director of Research and Data Analysis at the Piast Institute in Hamtramck, Michigan. Dominik’s research interests are comparative politics and political behavior, with an emphasis on public opinion formation, political psychology and political communications. Prior to his doctoral studies, Dominik attended McGill University in Montreal where he obtained a Master’s Degree in comparative politics. Dominik presented his academic research at academic conferences in Chicago, Montreal, Quebec City, Vancouver, San Francisco and San Diego and his academic and nonacademic writing has been featured in edited volumes and prominent Polish and Polish American outlets, including Polityka and Nowy Dziennik. He also co-authored Piast Institute’s book Polish Americans Today. Dominik is a recipient of many awards and scholarships, including The University of British Columbia’s prestigious 4YF doctoral fellowship and University of Michigan – Dearborn’s Chancellor’s Medallion, in addition to various research and teaching fellowships at the University of British Columbia and McGill University. Other awards include the William J. Branstron Award for the Outstanding Performance as a Freshman (2004); University of Michigan at Dearborn Humanities Department Intern of the Year (2007); Jan Adolf Gorecki National Scholarship for Polish and Polish American Students (2007, 2008, 2010); American Institute for Polish Culture Harriet Irsay Scholarship (2007, 2008); Friends of Polish Art Frank Filipek Scholarship for Outstanding Polish Students in Michigan (2008); Andrzej Kapiszewski Piast Institute Scholarship (2006); American Council for Polish Culture Skalny National Scholarship (2008). Dominik also served as an honorary committee member of the Young Polonia Foundation’s Triada Cultural Events in Warsaw and Vilnius for contributions to preserve Polish language and culture abroad (2009). Dominik is also the founder of Nihil Novi a weblog of Polish American politics, policy and culture. Nihil Novi provides a forum for serious thought and deliberation about matters concerning Polish Americans, Poland and the US. It is available at www.nihilnovijournal.org. Dr. Thaddeus Radzilowski [radzilowski@piastinstitute.org] is the President and co-founder of the Piast Institute, An Institute for Polish and Polish American Aﬀairs. He is President Emeritus of Saint Mary’s College in Orchard Lake, Michigan. Radzilowski is a historian who holds a Ph.D. in History from the University of Michigan. During his career he has taught at Madonna University, Heidelberg College and Southwest Minnesota State University in Minnesota. At Southwest Minnesota State he served as Chair of the Department of History, Director of the Regional History Center, Director of Rural Studies and Associate Vice President for Academic Aﬀairs. 2 This is a report based on both a Dekaban lecture and an academic paper presented at the Polish American Historical Association Conference. I...

This is a report based on both a Dekaban lecture and an academic paper presented at the Polish American Historical Association Conference. I...