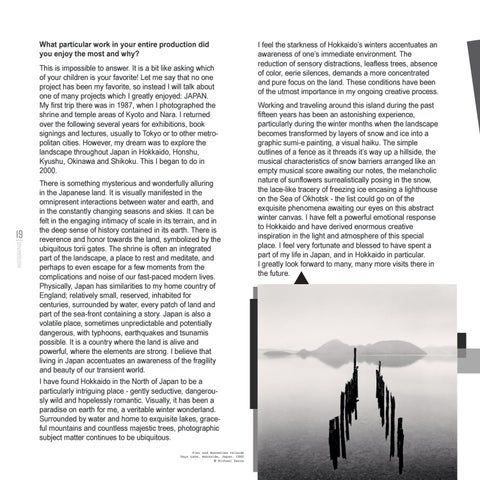 What particular work in your entire production did you enjoy the most and why? This is impossible to answer. It is a bit like asking which of your children is your favorite! Let me say that no one project has been my favorite, so instead I will talk about one of many projects which I greatly enjoyed: JAPAN. My first trip there was in 1987, when I photographed the shrine and temple areas of Kyoto and Nara. I returned over the following several years for exhibitions, book signings and lectures, usually to Tokyo or to other metropolitan cities. However, my dream was to explore the landscape throughout Japan in Hokkaido, Honshu, Kyushu, Okinawa and Shikoku. This I began to do in 2000.

There is something mysterious and wonderfully alluring in the Japanese land. It is visually manifested in the omnipresent interactions between water and earth, and in the constantly changing seasons and skies. It can be felt in the engaging intimacy of scale in its terrain, and in the deep sense of history contained in its earth. There is reverence and honor towards the land, symbolized by the ubiquitous torii gates. The shrine is often an integrated part of the landscape, a place to rest and meditate, and perhaps to even escape for a few moments from the complications and noise of our fast-paced modern lives. Physically, Japan has similarities to my home country of England; relatively small, reserved, inhabited for centuries, surrounded by water, every patch of land and part of the sea-front containing a story. Japan is also a volatile place, sometimes unpredictable and potentially dangerous, with typhoons, earthquakes and tsunamis possible. It is a country where the land is alive and powerful, where the elements are strong. I believe that living in Japan accentuates an awareness of the fragility and beauty of our transient world. I have found Hokkaido in the North of Japan to be a particularly intriguing place - gently seductive, dangerously wild and hopelessly romantic. Visually, it has been a paradise on earth for me, a veritable winter wonderland. Surrounded by water and home to exquisite lakes, graceful mountains and countless majestic trees, photographic subject matter continues to be ubiquitous. Pier and Nakashima Islands Toya Lake, Hokkaido, Japan. 2002 © Michael Kenna

I feel the starkness of Hokkaido’s winters accentuates an awareness of one’s immediate environment. The reduction of sensory distractions, leafless trees, absence of color, eerie silences, demands a more concentrated and pure focus on the land. These conditions have been of the utmost importance in my ongoing creative process. Working and traveling around this island during the past fifteen years has been an astonishing experience, particularly during the winter months when the landscape becomes transformed by layers of snow and ice into a graphic sumi-e painting, a visual haiku. The simple outlines of a fence as it threads it’s way up a hillside, the musical characteristics of snow barriers arranged like an empty musical score awaiting our notes, the melancholic nature of sunflowers surrealistically posing in the snow, the lace-like tracery of freezing ice encasing a lighthouse on the Sea of Okhotsk - the list could go on of the exquisite phenomena awaiting our eyes on this abstract winter canvas. I have felt a powerful emotional response to Hokkaido and have derived enormous creative inspiration in the light and atmosphere of this special place. I feel very fortunate and blessed to have spent a part of my life in Japan, and in Hokkaido in particular. I greatly look forward to many, many more visits there in the future. 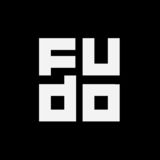