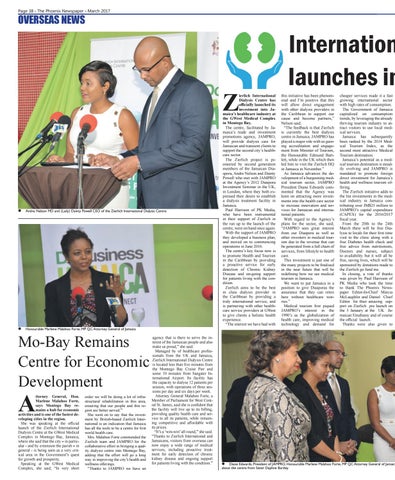 ttorney General, Hon. Marlene Malahoo Forte, says Montego Bay remains a hub for economic activities and is one of the fastest developing cities in the region. She was speaking at the official launch of the Zierlich International Dialysis Centre at the GWest Medical Complex in Montego Bay, Jamaica, where she said that the city – in particular - and by extension the parish – in general - is being seen as a very critical area in the Government’s quest for growth and prosperity. Speaking at the GWest Medical Complex, she said; “In very short

order we will be doing a lot of infrastructural rehabilitation in this area, ensuring that our people and this region are better served.” She went on to say that the investment by British-based Zierlich International is an indication that Jamaica has all the tools to be a centre for first world health care. Mrs. Malahoo Forte commended the Zierlich team and JAMPRO for the collaborative effort in bringing a quality dialysis centre into Montego Bay, adding that the effort will go a long way in improving the city’s health and wellness offerings. “Thanks to JAMPRO we have an

agency that is there to serve the interest of the Jamaican people and also make us proud,” she said. Managed by of healthcare professionals from the UK and Jamaica, Zierlich International Dialysis Centre is located less than five minutes from the Montego Bay Cruise Pier and some 10 minutes from Sangster International Airport. Its facility has the capacity to dialyse 12 patients per session, with operations of three sessions per day and six days per week. Attorney General Malahoo Forte, a Member of Parliament for West Central St. James, said she is confident that the facility will live up to its billing, providing quality health care and service to all its patients, while remaining competitive and affordable with its prices. “It’s a ‘win-win’ all round,” she said. “Thanks to Zierlich International and Jamaicans, visitors from overseas can now enjoy a wide range of medical services, including proactive treatment for early detection of chronic kidney disease and ongoing support for patients living with the condition.”

ierlich International Dialysis Centre has officially launched its investment into Jamaica’s healthcare industry at the GWest Medical Complex in Montego Bay. The centre, facilitated by Jamaica’s trade and investment promotions agency, JAMPRO, will provide dialysis care for Jamaican and transient clients to support the second city’s healthcare sector. The Zierlich project is pioneered by second generation members of the Jamaican Diaspora, Andre Nelson and Dainty Powell who met with JAMPRO at the Agency’s 2012 Diaspora Investment Seminar in the UK, in London, where they both expressed their desire to establish a dialysis treatment facility in Jamaica. Paul Harrison of PK Media, who have been instrumental in their support of Zierlich in the run up to the launch of the centre, were on hand once again. With the support of JAMPRO they developed a business plan, and moved on to commencing operations in June 2016. The centre’s key focus now is to promote Health and Tourism in the Caribbean by providing a proactive service for early detection of Chronic Kidney Disease and on-going support for patients living with the condition. Zierlich aims to be the best in class dialysis provider in the Caribbean by providing a truly international service, and is partnering with other healthcare service providers at GWest to give clients a holistic health experience. “The interest we have had with

this initiative has been phenomenal and I’m positive that this will allow direct engagement with other dialysis providers in the Caribbean to support our cause and become partners,” Nelson said. “The feedback is that Zierlich is currently the best dialysis centre in Jamaica. JAMPRO has played a major role with us gaining accreditation and engagement from Minister of Tourism, the Honourable Edmund Bartlett, while in the UK which then led him to visit the Zierlich HQ in Jamaica in November.” As Jamaica advances the development of a burgeoning medical tourism sector, JAMPRO President Diane Edwards commented that the Agency was keen on attracting more investments into the health care sector to increase innovation and services for Jamaican and international patients. With regard to the Agency’s plans for the sector, she said; “JAMPRO sees great interest from our Diaspora as well as other investors in medical tourism due to the revenue that can be generated from a full chain of services, from lifestyle to health care. This investment is just one of the many projects to be finalised in the near future that will be redefining how we see medical tourism in Jamaica. We want to put Jamaica in a position to give Diasporas the assurance that they can retire here without healthcare worries.” Medical tourism first piqued JAMPRO’s interest in the 1990’s as the globalization of health care, improving medical technology and demand for

cheaper services made it a fast growing international sector with high rates of consumption. The Government of Jamaica capitalized on consumption trends, by leveraging the already thriving tourism industry to attract visitors to use local medical services. Jamaica has subsequently been ranked by the 2014 Medical Tourism Index, as the second most attractive Medical Tourism destination. Jamaica’s potential as a medical tourism destination is steadily evolving and JAMPRO is mandated to promote foreign direct investment for Jamaica’s health and wellness tourism offering. The Zierlich initiative adds to the list investments in the medical industry in Jamaica contributing over JM$25 million to JAMPRO’s capital expenditure (CAPEX) for the 2016/2017 fiscal year. From the 20th to the 24th March there will be free Dialysis to locals for their first time visit to the clinic along with a free Diabetes health check and free advice from nutritionists, Doctors and nurses, subject to availability but it will all be free, saving lives, which will be sponsored by donations made to the Zierlich go fund me. In closing, a vote of thanks was given by Paul Harrison of PK Media who took the time to thank The Phoenix Newspaper Editor-In-Chief Marcia McLaughlin and Daniel Chief Editor for thier amazing support on Zierlich pre launch on the 5 Janaury at the UK Jamaican Emabassy and of course the official launch. Thanks were also given to