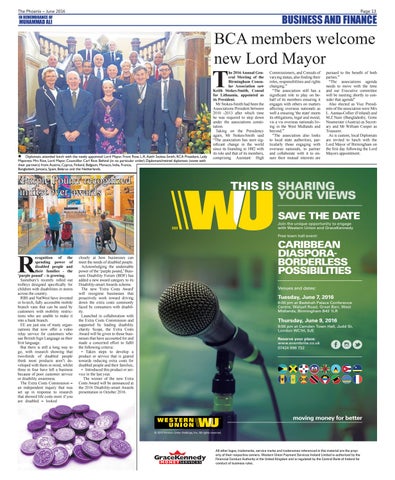 The Phoenix – June 2016 IN REMEMBRANCE OF

he 2016 Annual General Meeting of the Birmingham Consular Association saw Keith Stokes-Smith, Consul for Lithuania, appointed as its President. Mr Stokes-Smith had been the Associations President between 2010 -2013 after which time he was required to step down under the associations constitution. Taking on the Presidency again, Mr Stokes-Smith said “The association has seen significant change in the world since its founding in 1882 with its role and that of its members, comprising Assistant High

Commissioners, and Consuls of varying status, also finding their roles, responsibilities and rights changing.” “The association still has a significant role to play on behalf of its members ensuring it engages with others on matters affecting overseas nationals as well a ensuring 'the state' meets its obligations, legal and moral, vis a vis overseas nationals living in the West Midlands and beyond.” “The association also looks to local state authorities, particularly those engaging with overseas nationals, to partner and collaborate with it to ensure their mutual interests are

pursued to the benefit of both parties.” “The associations agenda needs to move with the time and our Executive committee will be meeting shortly to consider that agenda” Also elected as Vice Presidents of the association were Mrs L. Aantaa-Collier (Finland) and M.Z.Nain (Bangladesh); Grete Neumeister (Austria) as Secretary and Mr William Cooper as Treasurer. As is custom, local Diplomats are invited to lunch with the Lord Mayor of Birmingham on the first day following the Lord Mayors appointment.

THIS IS SHARING YOUR VIEWS SAVE THE DATE Join the unique opportunity to engage with Western Union and GraceKennedy Free town hall event:

ecognition of the spending power of disabled people and their families - the 'purple pound' - is growing. Sainsbury's recently rolled out trolleys designed specifically for children with disabilities in stores across the country. RBS and NatWest have invested in hi-tech, fully accessible mobile branch vans that can be used by customers with mobility restrictions who are unable to make it into a bank branch. EE are just one of many organisations that now offer a video relay service for customers who use British Sign Language as their first language. But there is still a long way to go; with research showing that two-thirds of disabled people think most products aren’t developed with them in mind, whilst three in four have left a business because of poor customer service or disability awareness. The Extra Costs Commission – an independent inquiry that was set up in response to research that showed life costs more if you are disabled – looked

closely at how businesses can meet the needs of disabled people. Acknowledging the undeniable power of the ‘purple pound,’ Business Disability Forum (BDF) has added a new award category to its Disability-smart Awards scheme. The new 'Extra Costs Award' will recognise businesses that proactively work toward driving down the extra costs commonly faced by consumers with disability. Launched in collaboration with the Extra Costs Commission and supported by leading disability charity Scope, the Extra Costs Award will be given to those businesses that have accounted for and made a concerted effort to fulfil the following criteria: • Taken steps to develop a product or service that is geared towards reducing extra costs for disabled people and their families; • Introduced this product or service in the last year. The winner of the new Extra Costs Award will be announced at the 2016 Disability-smart Awards presentation in October 2016.

All other logos, trademarks, service marks and tradenames referenced in this material are the property of their respective owners. Western Union Payment Services Ireland Limited is authorized by the Financial Conduct Authority in the United Kingdom and is regulated by the Central Bank of Ireland for conduct of business rules.