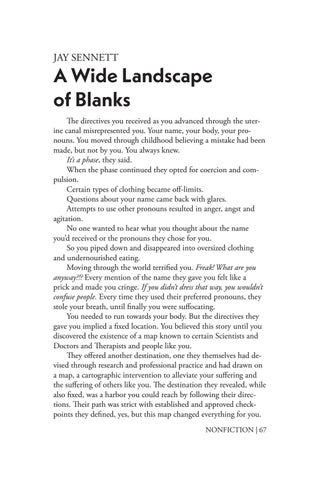 A Wide Landscape of Blanks The directives you received as you advanced through the uterine canal misrepresented you. Your name, your body, your pronouns. You moved through childhood believing a mistake had been made, but not by you. You always knew. It’s a phase, they said. When the phase continued they opted for coercion and compulsion. Certain types of clothing became off-limits. Questions about your name came back with glares. Attempts to use other pronouns resulted in anger, angst and agitation. No one wanted to hear what you thought about the name you’d received or the pronouns they chose for you. So you piped down and disappeared into oversized clothing and undernourished eating. Moving through the world terrified you. Freak! What are you anyway?!? Every mention of the name they gave you felt like a prick and made you cringe. If you didn’t dress that way, you wouldn’t confuse people. Every time they used their preferred pronouns, they stole your breath, until finally you were suffocating. You needed to run towards your body. But the directives they gave you implied a fixed location. You believed this story until you discovered the existence of a map known to certain Scientists and Doctors and Therapists and people like you. They offered another destination, one they themselves had devised through research and professional practice and had drawn on a map, a cartographic intervention to alleviate your suffering and the suffering of others like you. The destination they revealed, while also fixed, was a harbor you could reach by following their directions. Their path was strict with established and approved checkpoints they defined, yes, but this map changed everything for you. NONFICTION | 67