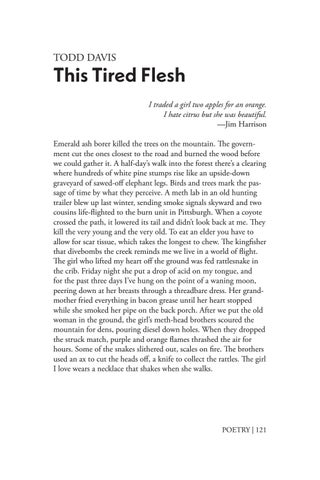 This Tired Flesh I traded a girl two apples for an orange. I hate citrus but she was beautiful. —Jim Harrison Emerald ash borer killed the trees on the mountain. The government cut the ones closest to the road and burned the wood before we could gather it. A half-day’s walk into the forest there’s a clearing where hundreds of white pine stumps rise like an upside-down graveyard of sawed-off elephant legs. Birds and trees mark the passage of time by what they perceive. A meth lab in an old hunting trailer blew up last winter, sending smoke signals skyward and two cousins life-flighted to the burn unit in Pittsburgh. When a coyote crossed the path, it lowered its tail and didn’t look back at me. They kill the very young and the very old. To eat an elder you have to allow for scar tissue, which takes the longest to chew. The kingfisher that divebombs the creek reminds me we live in a world of flight. The girl who lifted my heart off the ground was fed rattlesnake in the crib. Friday night she put a drop of acid on my tongue, and for the past three days I’ve hung on the point of a waning moon, peering down at her breasts through a threadbare dress. Her grandmother fried everything in bacon grease until her heart stopped while she smoked her pipe on the back porch. After we put the old woman in the ground, the girl’s meth-head brothers scoured the mountain for dens, pouring diesel down holes. When they dropped the struck match, purple and orange flames thrashed the air for hours. Some of the snakes slithered out, scales on fire. The brothers used an ax to cut the heads off, a knife to collect the rattles. The girl I love wears a necklace that shakes when she walks.