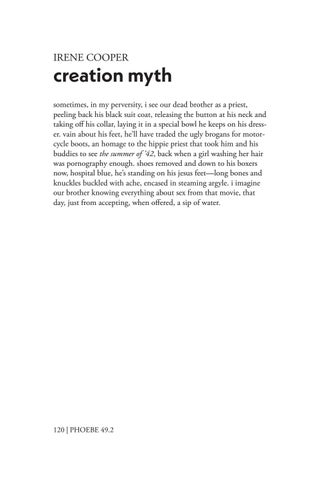 creation myth sometimes, in my perversity, i see our dead brother as a priest, peeling back his black suit coat, releasing the button at his neck and taking off his collar, laying it in a special bowl he keeps on his dresser. vain about his feet, he’ll have traded the ugly brogans for motorcycle boots, an homage to the hippie priest that took him and his buddies to see the summer of ’42, back when a girl washing her hair was pornography enough. shoes removed and down to his boxers now, hospital blue, he’s standing on his jesus feet—long bones and knuckles buckled with ache, encased in steaming argyle. i imagine our brother knowing everything about sex from that movie, that day, just from accepting, when offered, a sip of water.