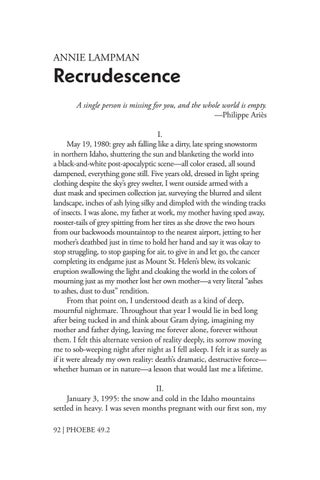 Recrudescence A single person is missing for you, and the whole world is empty. —Philippe Ariès I. May 19, 1980: grey ash falling like a dirty, late spring snowstorm in northern Idaho, shuttering the sun and blanketing the world into a black-and-white post-apocalyptic scene—all color erased, all sound dampened, everything gone still. Five years old, dressed in light spring clothing despite the sky’s grey swelter, I went outside armed with a dust mask and specimen collection jar, surveying the blurred and silent landscape, inches of ash lying silky and dimpled with the winding tracks of insects. I was alone, my father at work, my mother having sped away, rooster-tails of grey spitting from her tires as she drove the two hours from our backwoods mountaintop to the nearest airport, jetting to her mother’s deathbed just in time to hold her hand and say it was okay to stop struggling, to stop gasping for air, to give in and let go, the cancer completing its endgame just as Mount St. Helen’s blew, its volcanic eruption swallowing the light and cloaking the world in the colors of mourning just as my mother lost her own mother—a very literal “ashes to ashes, dust to dust” rendition. From that point on, I understood death as a kind of deep, mournful nightmare. Throughout that year I would lie in bed long after being tucked in and think about Gram dying, imagining my mother and father dying, leaving me forever alone, forever without them. I felt this alternate version of reality deeply, its sorrow moving me to sob-weeping night after night as I fell asleep. I felt it as surely as if it were already my own reality: death’s dramatic, destructive force— whether human or in nature—a lesson that would last me a lifetime. II. January 3, 1995: the snow and cold in the Idaho mountains settled in heavy. I was seven months pregnant with our first son, my 92 | PHOEBE 49.2