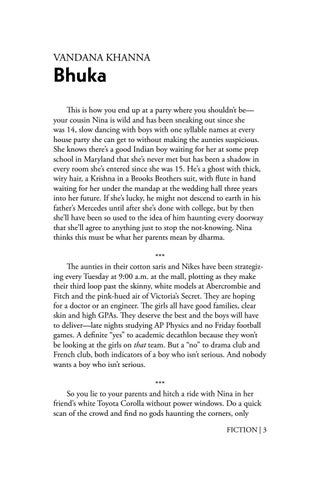 This is how you end up at a party where you shouldn’t be— your cousin Nina is wild and has been sneaking out since she was 14, slow dancing with boys with one syllable names at every house party she can get to without making the aunties suspicious. She knows there’s a good Indian boy waiting for her at some prep school in Maryland that she’s never met but has been a shadow in every room she’s entered since she was 15. He’s a ghost with thick, wiry hair, a Krishna in a Brooks Brothers suit, with flute in hand waiting for her under the mandap at the wedding hall three years into her future. If she’s lucky, he might not descend to earth in his father’s Mercedes until after she’s done with college, but by then she’ll have been so used to the idea of him haunting every doorway that she’ll agree to anything just to stop the not-knowing. Nina thinks this must be what her parents mean by dharma. *** The aunties in their cotton saris and Nikes have been strategizing every Tuesday at 9:00 a.m. at the mall, plotting as they make their third loop past the skinny, white models at Abercrombie and Fitch and the pink-hued air of Victoria’s Secret. They are hoping for a doctor or an engineer. The girls all have good families, clear skin and high GPAs. They deserve the best and the boys will have to deliver—late nights studying AP Physics and no Friday football games. A definite “yes” to academic decathlon because they won’t be looking at the girls on that team. But a “no” to drama club and French club, both indicators of a boy who isn’t serious. And nobody wants a boy who isn’t serious. *** So you lie to your parents and hitch a ride with Nina in her friend’s white Toyota Corolla without power windows. Do a quick scan of the crowd and find no gods haunting the corners, only FICTION | 3