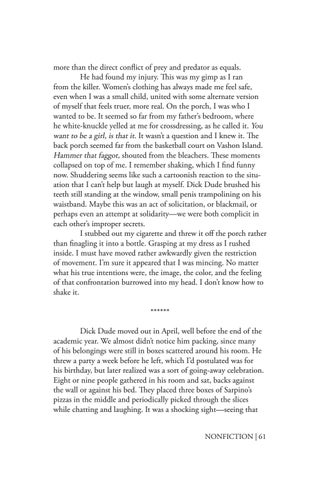 more than the direct conflict of prey and predator as equals. He had found my injury. This was my gimp as I ran from the killer. Women’s clothing has always made me feel safe, even when I was a small child, united with some alternate version of myself that feels truer, more real. On the porch, I was who I wanted to be. It seemed so far from my father’s bedroom, where he white-knuckle yelled at me for crossdressing, as he called it. You want to be a girl, is that it. It wasn’t a question and I knew it. The back porch seemed far from the basketball court on Vashon Island. Hammer that faggot, shouted from the bleachers. These moments collapsed on top of me. I remember shaking, which I find funny now. Shuddering seems like such a cartoonish reaction to the situation that I can’t help but laugh at myself. Dick Dude brushed his teeth still standing at the window, small penis trampolining on his waistband. Maybe this was an act of solicitation, or blackmail, or perhaps even an attempt at solidarity—we were both complicit in each other’s improper secrets. I stubbed out my cigarette and threw it off the porch rather than finagling it into a bottle. Grasping at my dress as I rushed inside. I must have moved rather awkwardly given the restriction of movement. I’m sure it appeared that I was mincing. No matter what his true intentions were, the image, the color, and the feeling of that confrontation burrowed into my head. I don’t know how to shake it. ****** Dick Dude moved out in April, well before the end of the academic year. We almost didn’t notice him packing, since many of his belongings were still in boxes scattered around his room. He threw a party a week before he left, which I’d postulated was for his birthday, but later realized was a sort of going-away celebration. Eight or nine people gathered in his room and sat, backs against the wall or against his bed. They placed three boxes of Sarpino’s pizzas in the middle and periodically picked through the slices while chatting and laughing. It was a shocking sight—seeing that NONFICTION | 61