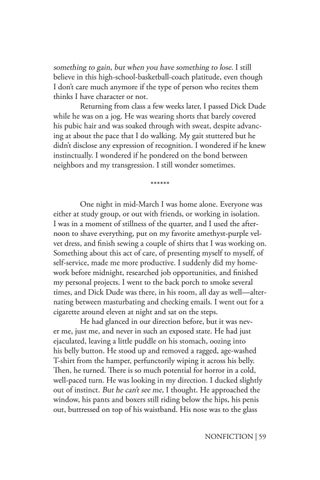 something to gain, but when you have something to lose. I still believe in this high-school-basketball-coach platitude, even though I don’t care much anymore if the type of person who recites them thinks I have character or not. Returning from class a few weeks later, I passed Dick Dude while he was on a jog. He was wearing shorts that barely covered his pubic hair and was soaked through with sweat, despite advancing at about the pace that I do walking. My gait stuttered but he didn’t disclose any expression of recognition. I wondered if he knew instinctually. I wondered if he pondered on the bond between neighbors and my transgression. I still wonder sometimes. ****** One night in mid-March I was home alone. Everyone was either at study group, or out with friends, or working in isolation. I was in a moment of stillness of the quarter, and I used the afternoon to shave everything, put on my favorite amethyst-purple velvet dress, and finish sewing a couple of shirts that I was working on. Something about this act of care, of presenting myself to myself, of self-service, made me more productive. I suddenly did my homework before midnight, researched job opportunities, and finished my personal projects. I went to the back porch to smoke several times, and Dick Dude was there, in his room, all day as well—alternating between masturbating and checking emails. I went out for a cigarette around eleven at night and sat on the steps. He had glanced in our direction before, but it was never me, just me, and never in such an exposed state. He had just ejaculated, leaving a little puddle on his stomach, oozing into his belly button. He stood up and removed a ragged, age-washed T-shirt from the hamper, perfunctorily wiping it across his belly. Then, he turned. There is so much potential for horror in a cold, well-paced turn. He was looking in my direction. I ducked slightly out of instinct. But he can’t see me, I thought. He approached the window, his pants and boxers still riding below the hips, his penis out, buttressed on top of his waistband. His nose was to the glass NONFICTION | 59