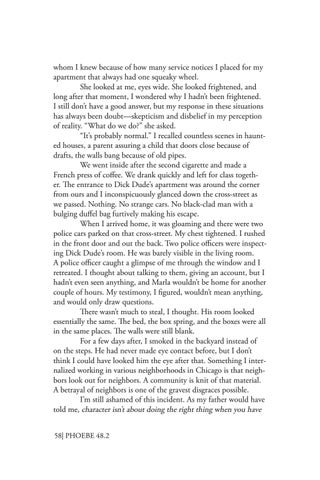 whom I knew because of how many service notices I placed for my apartment that always had one squeaky wheel. She looked at me, eyes wide. She looked frightened, and long after that moment, I wondered why I hadn’t been frightened. I still don’t have a good answer, but my response in these situations has always been doubt—skepticism and disbelief in my perception of reality. “What do we do?” she asked. “It’s probably normal.” I recalled countless scenes in haunted houses, a parent assuring a child that doors close because of drafts, the walls bang because of old pipes. We went inside after the second cigarette and made a French press of coffee. We drank quickly and left for class together. The entrance to Dick Dude’s apartment was around the corner from ours and I inconspicuously glanced down the cross-street as we passed. Nothing. No strange cars. No black-clad man with a bulging duffel bag furtively making his escape. When I arrived home, it was gloaming and there were two police cars parked on that cross-street. My chest tightened. I rushed in the front door and out the back. Two police officers were inspecting Dick Dude’s room. He was barely visible in the living room. A police officer caught a glimpse of me through the window and I retreated. I thought about talking to them, giving an account, but I hadn’t even seen anything, and Marla wouldn’t be home for another couple of hours. My testimony, I figured, wouldn’t mean anything, and would only draw questions. There wasn’t much to steal, I thought. His room looked essentially the same. The bed, the box spring, and the boxes were all in the same places. The walls were still blank. For a few days after, I smoked in the backyard instead of on the steps. He had never made eye contact before, but I don’t think I could have looked him the eye after that. Something I internalized working in various neighborhoods in Chicago is that neighbors look out for neighbors. A community is knit of that material. A betrayal of neighbors is one of the gravest disgraces possible. I’m still ashamed of this incident. As my father would have told me, character isn’t about doing the right thing when you have 58| PHOEBE 48.2