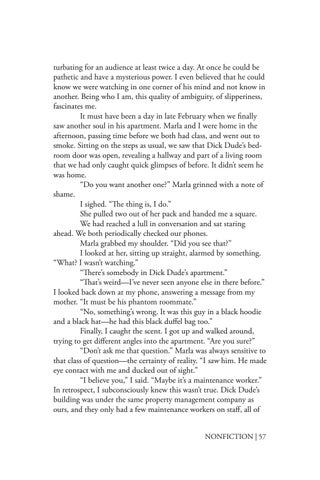 turbating for an audience at least twice a day. At once he could be pathetic and have a mysterious power. I even believed that he could know we were watching in one corner of his mind and not know in another. Being who I am, this quality of ambiguity, of slipperiness, fascinates me. It must have been a day in late February when we finally saw another soul in his apartment. Marla and I were home in the afternoon, passing time before we both had class, and went out to smoke. Sitting on the steps as usual, we saw that Dick Dude’s bedroom door was open, revealing a hallway and part of a living room that we had only caught quick glimpses of before. It didn’t seem he was home. “Do you want another one?” Marla grinned with a note of shame. I sighed. “The thing is, I do.” She pulled two out of her pack and handed me a square. We had reached a lull in conversation and sat staring ahead. We both periodically checked our phones. Marla grabbed my shoulder. “Did you see that?” I looked at her, sitting up straight, alarmed by something. “What? I wasn’t watching.” “There’s somebody in Dick Dude’s apartment.” “That’s weird—I’ve never seen anyone else in there before.” I looked back down at my phone, answering a message from my mother. “It must be his phantom roommate.” “No, something’s wrong. It was this guy in a black hoodie and a black hat—he had this black duffel bag too.” Finally, I caught the scent. I got up and walked around, trying to get different angles into the apartment. “Are you sure?” “Don’t ask me that question.” Marla was always sensitive to that class of question—the certainty of reality. “I saw him. He made eye contact with me and ducked out of sight.” “I believe you,” I said. “Maybe it’s a maintenance worker.” In retrospect, I subconsciously knew this wasn’t true. Dick Dude’s building was under the same property management company as ours, and they only had a few maintenance workers on staff, all of NONFICTION | 57