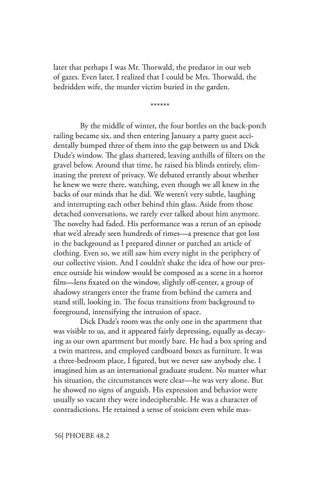 later that perhaps I was Mr. Thorwald, the predator in our web of gazes. Even later, I realized that I could be Mrs. Thorwald, the bedridden wife, the murder victim buried in the garden. ****** By the middle of winter, the four bottles on the back-porch railing became six, and then entering January a party guest accidentally bumped three of them into the gap between us and Dick Dude’s window. The glass shattered, leaving anthills of filters on the gravel below. Around that time, he raised his blinds entirely, eliminating the pretext of privacy. We debated errantly about whether he knew we were there, watching, even though we all knew in the backs of our minds that he did. We weren’t very subtle, laughing and interrupting each other behind thin glass. Aside from those detached conversations, we rarely ever talked about him anymore. The novelty had faded. His performance was a rerun of an episode that we’d already seen hundreds of times—a presence that got lost in the background as I prepared dinner or patched an article of clothing. Even so, we still saw him every night in the periphery of our collective vision. And I couldn’t shake the idea of how our presence outside his window would be composed as a scene in a horror film—lens fixated on the window, slightly off-center, a group of shadowy strangers enter the frame from behind the camera and stand still, looking in. The focus transitions from background to foreground, intensifying the intrusion of space. Dick Dude’s room was the only one in the apartment that was visible to us, and it appeared fairly depressing, equally as decaying as our own apartment but mostly bare. He had a box spring and a twin mattress, and employed cardboard boxes as furniture. It was a three-bedroom place, I figured, but we never saw anybody else. I imagined him as an international graduate student. No matter what his situation, the circumstances were clear—he was very alone. But he showed no signs of anguish. His expression and behavior were usually so vacant they were indecipherable. He was a character of contradictions. He retained a sense of stoicism even while mas56| PHOEBE 48.2