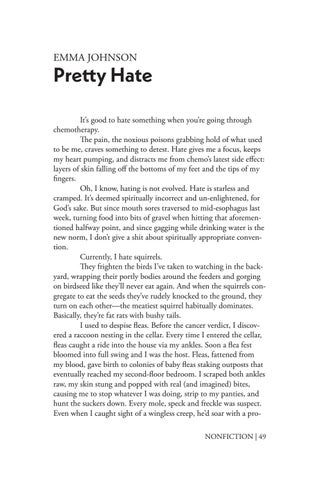 Pretty Hate It’s good to hate something when you’re going through chemotherapy. The pain, the noxious poisons grabbing hold of what used to be me, craves something to detest. Hate gives me a focus, keeps my heart pumping, and distracts me from chemo’s latest side effect: layers of skin falling off the bottoms of my feet and the tips of my fingers. Oh, I know, hating is not evolved. Hate is starless and cramped. It’s deemed spiritually incorrect and un-enlightened, for God’s sake. But since mouth sores traversed to mid-esophagus last week, turning food into bits of gravel when hitting that aforementioned halfway point, and since gagging while drinking water is the new norm, I don’t give a shit about spiritually appropriate convention. Currently, I hate squirrels. They frighten the birds I’ve taken to watching in the backyard, wrapping their portly bodies around the feeders and gorging on birdseed like they’ll never eat again. And when the squirrels congregate to eat the seeds they’ve rudely knocked to the ground, they turn on each other—the meatiest squirrel habitually dominates. Basically, they’re fat rats with bushy tails. I used to despise fleas. Before the cancer verdict, I discovered a raccoon nesting in the cellar. Every time I entered the cellar, fleas caught a ride into the house via my ankles. Soon a flea fest bloomed into full swing and I was the host. Fleas, fattened from my blood, gave birth to colonies of baby fleas staking outposts that eventually reached my second-floor bedroom. I scraped both ankles raw, my skin stung and popped with real (and imagined) bites, causing me to stop whatever I was doing, strip to my panties, and hunt the suckers down. Every mole, speck and freckle was suspect. Even when I caught sight of a wingless creep, he’d soar with a proNONFICTION | 49