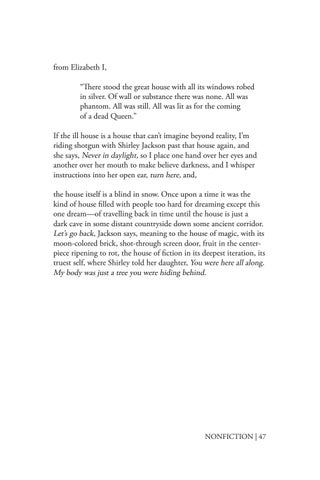 from Elizabeth I, “There stood the great house with all its windows robed in silver. Of wall or substance there was none. All was phantom. All was still. All was lit as for the coming of a dead Queen.” If the ill house is a house that can’t imagine beyond reality, I’m riding shotgun with Shirley Jackson past that house again, and she says, Never in daylight, so I place one hand over her eyes and another over her mouth to make believe darkness, and I whisper instructions into her open ear, turn here, and, the house itself is a blind in snow. Once upon a time it was the kind of house filled with people too hard for dreaming except this one dream—of travelling back in time until the house is just a dark cave in some distant countryside down some ancient corridor. Let’s go back, Jackson says, meaning to the house of magic, with its moon-colored brick, shot-through screen door, fruit in the centerpiece ripening to rot, the house of fiction in its deepest iteration, its truest self, where Shirley told her daughter, You were here all along. My body was just a tree you were hiding behind.