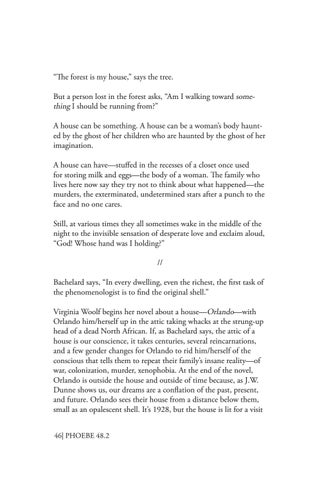 “The forest is my house,” says the tree. But a person lost in the forest asks, “Am I walking toward something I should be running from?” A house can be something. A house can be a woman’s body haunted by the ghost of her children who are haunted by the ghost of her imagination. A house can have—stuffed in the recesses of a closet once used for storing milk and eggs—the body of a woman. The family who lives here now say they try not to think about what happened—the murders, the exterminated, undetermined stars after a punch to the face and no one cares. Still, at various times they all sometimes wake in the middle of the night to the invisible sensation of desperate love and exclaim aloud, “God! Whose hand was I holding?” // Bachelard says, “In every dwelling, even the richest, the first task of the phenomenologist is to find the original shell.” Virginia Woolf begins her novel about a house—Orlando—with Orlando him/herself up in the attic taking whacks at the strung-up head of a dead North African. If, as Bachelard says, the attic of a house is our conscience, it takes centuries, several reincarnations, and a few gender changes for Orlando to rid him/herself of the conscious that tells them to repeat their family’s insane reality—of war, colonization, murder, xenophobia. At the end of the novel, Orlando is outside the house and outside of time because, as J.W. Dunne shows us, our dreams are a conflation of the past, present, and future. Orlando sees their house from a distance below them, small as an opalescent shell. It’s 1928, but the house is lit for a visit 46| PHOEBE 48.2