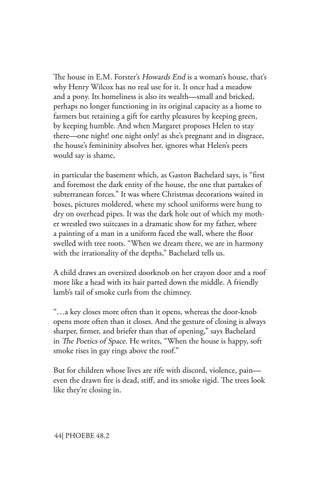 The house in E.M. Forster’s Howards End is a woman’s house, that’s why Henry Wilcox has no real use for it. It once had a meadow and a pony. Its homeliness is also its wealth—small and bricked, perhaps no longer functioning in its original capacity as a home to farmers but retaining a gift for earthy pleasures by keeping green, by keeping humble. And when Margaret proposes Helen to stay there—one night! one night only! as she’s pregnant and in disgrace, the house’s femininity absolves her, ignores what Helen’s peers would say is shame, in particular the basement which, as Gaston Bachelard says, is “first and foremost the dark entity of the house, the one that partakes of subterranean forces.” It was where Christmas decorations waited in boxes, pictures moldered, where my school uniforms were hung to dry on overhead pipes. It was the dark hole out of which my mother wrestled two suitcases in a dramatic show for my father, where a painting of a man in a uniform faced the wall, where the floor swelled with tree roots. “When we dream there, we are in harmony with the irrationality of the depths,” Bachelard tells us. A child draws an oversized doorknob on her crayon door and a roof more like a head with its hair parted down the middle. A friendly lamb’s tail of smoke curls from the chimney. “…a key closes more often than it opens, whereas the door-knob opens more often than it closes. And the gesture of closing is always sharper, firmer, and briefer than that of opening,” says Bachelard in The Poetics of Space. He writes, “When the house is happy, soft smoke rises in gay rings above the roof.” But for children whose lives are rife with discord, violence, pain— even the drawn fire is dead, stiff, and its smoke rigid. The trees look like they’re closing in.