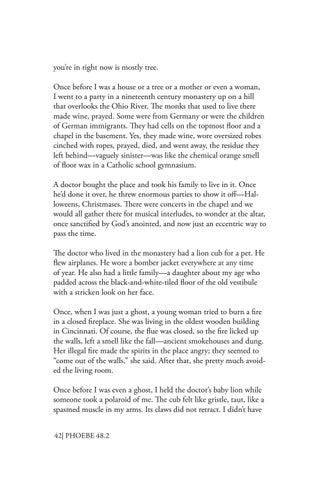 you’re in right now is mostly tree. Once before I was a house or a tree or a mother or even a woman, I went to a party in a nineteenth century monastery up on a hill that overlooks the Ohio River. The monks that used to live there made wine, prayed. Some were from Germany or were the children of German immigrants. They had cells on the topmost floor and a chapel in the basement. Yes, they made wine, wore oversized robes cinched with ropes, prayed, died, and went away, the residue they left behind—vaguely sinister—was like the chemical orange smell of floor wax in a Catholic school gymnasium. A doctor bought the place and took his family to live in it. Once he’d done it over, he threw enormous parties to show it off—Halloweens, Christmases. There were concerts in the chapel and we would all gather there for musical interludes, to wonder at the altar, once sanctified by God’s anointed, and now just an eccentric way to pass the time. The doctor who lived in the monastery had a lion cub for a pet. He flew airplanes. He wore a bomber jacket everywhere at any time of year. He also had a little family—a daughter about my age who padded across the black-and-white-tiled floor of the old vestibule with a stricken look on her face. Once, when I was just a ghost, a young woman tried to burn a fire in a closed fireplace. She was living in the oldest wooden building in Cincinnati. Of course, the flue was closed, so the fire licked up the walls, left a smell like the fall—ancient smokehouses and dung. Her illegal fire made the spirits in the place angry; they seemed to “come out of the walls,” she said. After that, she pretty much avoided the living room. Once before I was even a ghost, I held the doctor’s baby lion while someone took a polaroid of me. The cub felt like gristle, taut, like a spasmed muscle in my arms. Its claws did not retract. I didn’t have 42| PHOEBE 48.2