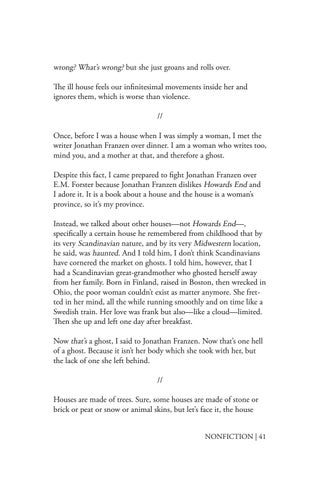 wrong? What’s wrong? but she just groans and rolls over. The ill house feels our infinitesimal movements inside her and ignores them, which is worse than violence. // Once, before I was a house when I was simply a woman, I met the writer Jonathan Franzen over dinner. I am a woman who writes too, mind you, and a mother at that, and therefore a ghost. Despite this fact, I came prepared to fight Jonathan Franzen over E.M. Forster because Jonathan Franzen dislikes Howards End and I adore it. It is a book about a house and the house is a woman’s province, so it’s my province. Instead, we talked about other houses—not Howards End—, specifically a certain house he remembered from childhood that by its very Scandinavian nature, and by its very Midwestern location, he said, was haunted. And I told him, I don’t think Scandinavians have cornered the market on ghosts. I told him, however, that I had a Scandinavian great-grandmother who ghosted herself away from her family. Born in Finland, raised in Boston, then wrecked in Ohio, the poor woman couldn’t exist as matter anymore. She fretted in her mind, all the while running smoothly and on time like a Swedish train. Her love was frank but also—like a cloud—limited. Then she up and left one day after breakfast. Now that’s a ghost, I said to Jonathan Franzen. Now that’s one hell of a ghost. Because it isn’t her body which she took with her, but the lack of one she left behind. // Houses are made of trees. Sure, some houses are made of stone or brick or peat or snow or animal skins, but let’s face it, the house NONFICTION | 41