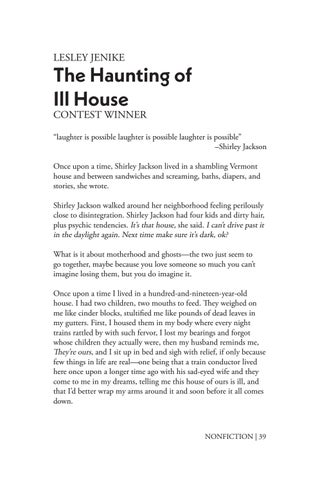 “laughter is possible laughter is possible laughter is possible” –Shirley Jackson Once upon a time, Shirley Jackson lived in a shambling Vermont house and between sandwiches and screaming, baths, diapers, and stories, she wrote. Shirley Jackson walked around her neighborhood feeling perilously close to disintegration. Shirley Jackson had four kids and dirty hair, plus psychic tendencies. It’s that house, she said. I can’t drive past it in the daylight again. Next time make sure it’s dark, ok? What is it about motherhood and ghosts—the two just seem to go together, maybe because you love someone so much you can’t imagine losing them, but you do imagine it. Once upon a time I lived in a hundred-and-nineteen-year-old house. I had two children, two mouths to feed. They weighed on me like cinder blocks, stultified me like pounds of dead leaves in my gutters. First, I housed them in my body where every night trains rattled by with such fervor, I lost my bearings and forgot whose children they actually were, then my husband reminds me, They’re ours, and I sit up in bed and sigh with relief, if only because few things in life are real—one being that a train conductor lived here once upon a longer time ago with his sad-eyed wife and they come to me in my dreams, telling me this house of ours is ill, and that I’d better wrap my arms around it and soon before it all comes down.