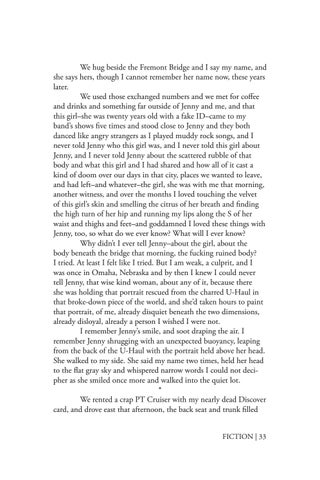 We hug beside the Fremont Bridge and I say my name, and she says hers, though I cannot remember her name now, these years later. We used those exchanged numbers and we met for coffee and drinks and something far outside of Jenny and me, and that this girl–she was twenty years old with a fake ID–came to my band’s shows five times and stood close to Jenny and they both danced like angry strangers as I played muddy rock songs, and I never told Jenny who this girl was, and I never told this girl about Jenny, and I never told Jenny about the scattered rubble of that body and what this girl and I had shared and how all of it cast a kind of doom over our days in that city, places we wanted to leave, and had left–and whatever–the girl, she was with me that morning, another witness, and over the months I loved touching the velvet of this girl’s skin and smelling the citrus of her breath and finding the high turn of her hip and running my lips along the S of her waist and thighs and feet–and goddamned I loved these things with Jenny, too, so what do we ever know? What will I ever know? Why didn’t I ever tell Jenny–about the girl, about the body beneath the bridge that morning, the fucking ruined body? I tried. At least I felt like I tried. But I am weak, a culprit, and I was once in Omaha, Nebraska and by then I knew I could never tell Jenny, that wise kind woman, about any of it, because there she was holding that portrait rescued from the charred U-Haul in that broke-down piece of the world, and she’d taken hours to paint that portrait, of me, already disquiet beneath the two dimensions, already disloyal, already a person I wished I were not. I remember Jenny’s smile, and soot draping the air. I remember Jenny shrugging with an unexpected buoyancy, leaping from the back of the U-Haul with the portrait held above her head. She walked to my side. She said my name two times, held her head to the flat gray sky and whispered narrow words I could not decipher as she smiled once more and walked into the quiet lot. * We rented a crap PT Cruiser with my nearly dead Discover card, and drove east that afternoon, the back seat and trunk filled FICTION | 33