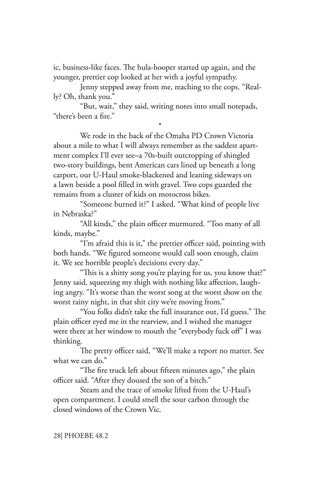 ic, business-like faces. The hula-hooper started up again, and the younger, prettier cop looked at her with a joyful sympathy. Jenny stepped away from me, reaching to the cops. “Really? Oh, thank you.” “But, wait,” they said, writing notes into small notepads, “there’s been a fire.” * We rode in the back of the Omaha PD Crown Victoria about a mile to what I will always remember as the saddest apartment complex I’ll ever see–a 70s-built outcropping of shingled two-story buildings, bent American cars lined up beneath a long carport, our U-Haul smoke-blackened and leaning sideways on a lawn beside a pool filled in with gravel. Two cops guarded the remains from a cluster of kids on motocross bikes. “Someone burned it?” I asked. “What kind of people live in Nebraska?” “All kinds,” the plain officer murmured. “Too many of all kinds, maybe.” “I’m afraid this is it,” the prettier officer said, pointing with both hands. “We figured someone would call soon enough, claim it. We see horrible people’s decisions every day.” “This is a shitty song you’re playing for us, you know that?” Jenny said, squeezing my thigh with nothing like affection, laughing angry. “It’s worse than the worst song at the worst show on the worst rainy night, in that shit city we’re moving from.” “You folks didn’t take the full insurance out, I’d guess.” The plain officer eyed me in the rearview, and I wished the manager were there at her window to mouth the “everybody fuck off” I was thinking. The pretty officer said, “We’ll make a report no matter. See what we can do.” “The fire truck left about fifteen minutes ago,” the plain officer said. “After they doused the son of a bitch.” Steam and the trace of smoke lifted from the U-Haul’s open compartment. I could smell the sour carbon through the closed windows of the Crown Vic. 28| PHOEBE 48.2