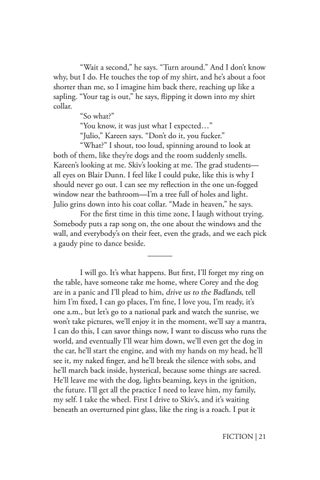 “Wait a second,” he says. “Turn around.” And I don’t know why, but I do. He touches the top of my shirt, and he’s about a foot shorter than me, so I imagine him back there, reaching up like a sapling. “Your tag is out,” he says, flipping it down into my shirt collar. “So what?” “You know, it was just what I expected…” “Julio,” Kareen says. “Don’t do it, you fucker.” “What?” I shout, too loud, spinning around to look at both of them, like they’re dogs and the room suddenly smells. Kareen’s looking at me. Skiv’s looking at me. The grad students— all eyes on Blair Dunn. I feel like I could puke, like this is why I should never go out. I can see my reflection in the one un-fogged window near the bathroom—I’m a tree full of holes and light. Julio grins down into his coat collar. “Made in heaven,” he says. For the first time in this time zone, I laugh without trying. Somebody puts a rap song on, the one about the windows and the wall, and everybody’s on their feet, even the grads, and we each pick a gaudy pine to dance beside. ______ I will go. It’s what happens. But first, I’ll forget my ring on the table, have someone take me home, where Corey and the dog are in a panic and I’ll plead to him, drive us to the Badlands, tell him I’m fixed, I can go places, I’m fine, I love you, I’m ready, it’s one a.m., but let’s go to a national park and watch the sunrise, we won’t take pictures, we’ll enjoy it in the moment, we’ll say a mantra, I can do this, I can savor things now, I want to discuss who runs the world, and eventually I’ll wear him down, we’ll even get the dog in the car, he’ll start the engine, and with my hands on my head, he’ll see it, my naked finger, and he’ll break the silence with sobs, and he’ll march back inside, hysterical, because some things are sacred. He’ll leave me with the dog, lights beaming, keys in the ignition, the future. I’ll get all the practice I need to leave him, my family, my self. I take the wheel. First I drive to Skiv’s, and it’s waiting beneath an overturned pint glass, like the ring is a roach. I put it FICTION | 21