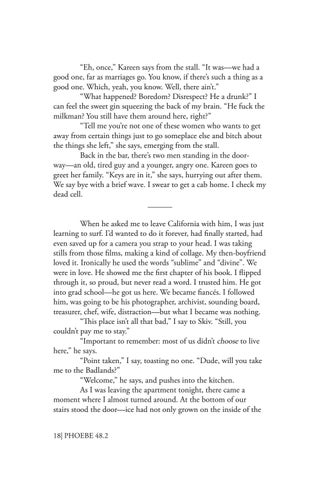 “Eh, once,” Kareen says from the stall. “It was—we had a good one, far as marriages go. You know, if there’s such a thing as a good one. Which, yeah, you know. Well, there ain’t.” “What happened? Boredom? Disrespect? He a drunk?” I can feel the sweet gin squeezing the back of my brain. “He fuck the milkman? You still have them around here, right?” “Tell me you’re not one of these women who wants to get away from certain things just to go someplace else and bitch about the things she left,” she says, emerging from the stall. Back in the bar, there’s two men standing in the doorway—an old, tired guy and a younger, angry one. Kareen goes to greet her family. “Keys are in it,” she says, hurrying out after them. We say bye with a brief wave. I swear to get a cab home. I check my dead cell. ______ When he asked me to leave California with him, I was just learning to surf. I’d wanted to do it forever, had finally started, had even saved up for a camera you strap to your head. I was taking stills from those films, making a kind of collage. My then-boyfriend loved it. Ironically he used the words “sublime” and “divine”. We were in love. He showed me the first chapter of his book. I flipped through it, so proud, but never read a word. I trusted him. He got into grad school—he got us here. We became fiancés. I followed him, was going to be his photographer, archivist, sounding board, treasurer, chef, wife, distraction—but what I became was nothing. “This place isn’t all that bad,” I say to Skiv. “Still, you couldn’t pay me to stay.” “Important to remember: most of us didn’t choose to live here,” he says. “Point taken,” I say, toasting no one. “Dude, will you take me to the Badlands?” “Welcome,” he says, and pushes into the kitchen. As I was leaving the apartment tonight, there came a moment where I almost turned around. At the bottom of our stairs stood the door—ice had not only grown on the inside of the 18| PHOEBE 48.2