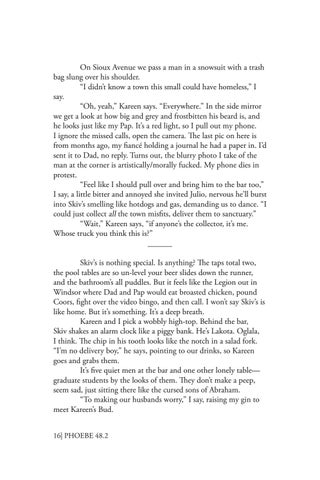 On Sioux Avenue we pass a man in a snowsuit with a trash bag slung over his shoulder. “I didn’t know a town this small could have homeless,” I say. “Oh, yeah,” Kareen says. “Everywhere.” In the side mirror we get a look at how big and grey and frostbitten his beard is, and he looks just like my Pap. It’s a red light, so I pull out my phone. I ignore the missed calls, open the camera. The last pic on here is from months ago, my fiancé holding a journal he had a paper in. I’d sent it to Dad, no reply. Turns out, the blurry photo I take of the man at the corner is artistically/morally fucked. My phone dies in protest. “Feel like I should pull over and bring him to the bar too,” I say, a little bitter and annoyed she invited Julio, nervous he’ll burst into Skiv’s smelling like hotdogs and gas, demanding us to dance. “I could just collect all the town misfits, deliver them to sanctuary.” “Wait,” Kareen says, “if anyone’s the collector, it’s me. Whose truck you think this is?” ______ Skiv’s is nothing special. Is anything? The taps total two, the pool tables are so un-level your beer slides down the runner, and the bathroom’s all puddles. But it feels like the Legion out in Windsor where Dad and Pap would eat broasted chicken, pound Coors, fight over the video bingo, and then call. I won’t say Skiv’s is like home. But it’s something. It’s a deep breath. Kareen and I pick a wobbly high-top. Behind the bar, Skiv shakes an alarm clock like a piggy bank. He’s Lakota. Oglala, I think. The chip in his tooth looks like the notch in a salad fork. “I’m no delivery boy,” he says, pointing to our drinks, so Kareen goes and grabs them. It’s five quiet men at the bar and one other lonely table— graduate students by the looks of them. They don’t make a peep, seem sad, just sitting there like the cursed sons of Abraham. “To making our husbands worry,” I say, raising my gin to meet Kareen’s Bud. 16| PHOEBE 48.2