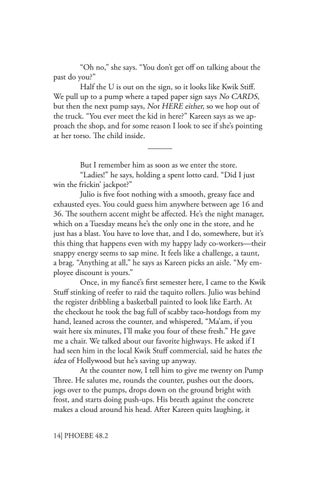 “Oh no,” she says. “You don’t get off on talking about the past do you?” Half the U is out on the sign, so it looks like Kwik Stiff. We pull up to a pump where a taped paper sign says No CARDS, but then the next pump says, Not HERE either, so we hop out of the truck. “You ever meet the kid in here?” Kareen says as we approach the shop, and for some reason I look to see if she’s pointing at her torso. The child inside. ______ But I remember him as soon as we enter the store. “Ladies!” he says, holding a spent lotto card. “Did I just win the frickin’ jackpot?” Julio is five foot nothing with a smooth, greasy face and exhausted eyes. You could guess him anywhere between age 16 and 36. The southern accent might be affected. He’s the night manager, which on a Tuesday means he’s the only one in the store, and he just has a blast. You have to love that, and I do, somewhere, but it’s this thing that happens even with my happy lady co-workers—their snappy energy seems to sap mine. It feels like a challenge, a taunt, a brag. “Anything at all,” he says as Kareen picks an aisle. “My employee discount is yours.” Once, in my fiancé’s first semester here, I came to the Kwik Stuff stinking of reefer to raid the taquito rollers. Julio was behind the register dribbling a basketball painted to look like Earth. At the checkout he took the bag full of scabby taco-hotdogs from my hand, leaned across the counter, and whispered, “Ma’am, if you wait here six minutes, I’ll make you four of these fresh.” He gave me a chair. We talked about our favorite highways. He asked if I had seen him in the local Kwik Stuff commercial, said he hates the idea of Hollywood but he’s saving up anyway. At the counter now, I tell him to give me twenty on Pump Three. He salutes me, rounds the counter, pushes out the doors, jogs over to the pumps, drops down on the ground bright with frost, and starts doing push-ups. His breath against the concrete makes a cloud around his head. After Kareen quits laughing, it 14| PHOEBE 48.2