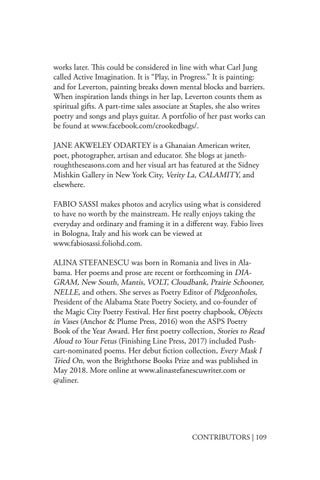 works later. This could be considered in line with what Carl Jung called Active Imagination. It is â&amp;#x20AC;&amp;#x153;Play, in Progress.â&amp;#x20AC;? It is painting: and for Leverton, painting breaks down mental blocks and barriers. When inspiration lands things in her lap, Leverton counts them as spiritual gifts. A part-time sales associate at Staples, she also writes poetry and songs and plays guitar. A portfolio of her past works can be found at www.facebook.com/crookedbags/. JANE AKWELEY ODARTEY is a Ghanaian American writer, poet, photographer, artisan and educator. She blogs at janethroughtheseasons.com and her visual art has featured at the Sidney Mishkin Gallery in New York City, Verity La, CALAMITY, and elsewhere. FABIO SASSI makes photos and acrylics using what is considered to have no worth by the mainstream. He really enjoys taking the everyday and ordinary and framing it in a different way. Fabio lives in Bologna, Italy and his work can be viewed at www.fabiosassi.foliohd.com. ALINA STEFANESCU was born in Romania and lives in Alabama. Her poems and prose are recent or forthcoming in DIAGRAM, New South, Mantis, VOLT, Cloudbank, Prairie Schooner, NELLE, and others. She serves as Poetry Editor of Pidgeonholes, President of the Alabama State Poetry Society, and co-founder of the Magic City Poetry Festival. Her first poetry chapbook, Objects in Vases (Anchor &amp; Plume Press, 2016) won the ASPS Poetry Book of the Year Award. Her first poetry collection, Stories to Read Aloud to Your Fetus (Finishing Line Press, 2017) included Pushcart-nominated poems. Her debut fiction collection, Every Mask I Tried On, won the Brighthorse Books Prize and was published in May 2018. More online at www.alinastefanescuwriter.com or @aliner.