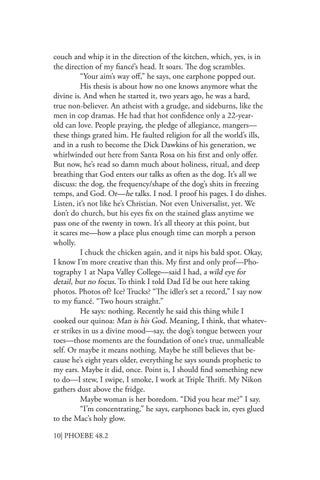 couch and whip it in the direction of the kitchen, which, yes, is in the direction of my fiancé’s head. It soars. The dog scrambles. “Your aim’s way off,” he says, one earphone popped out. His thesis is about how no one knows anymore what the divine is. And when he started it, two years ago, he was a hard, true non-believer. An atheist with a grudge, and sideburns, like the men in cop dramas. He had that hot confidence only a 22-yearold can love. People praying, the pledge of allegiance, mangers— these things grated him. He faulted religion for all the world’s ills, and in a rush to become the Dick Dawkins of his generation, we whirlwinded out here from Santa Rosa on his first and only offer. But now, he’s read so damn much about holiness, ritual, and deep breathing that God enters our talks as often as the dog. It’s all we discuss: the dog, the frequency/shape of the dog’s shits in freezing temps, and God. Or—he talks. I nod. I proof his pages. I do dishes. Listen, it’s not like he’s Christian. Not even Universalist, yet. We don’t do church, but his eyes fix on the stained glass anytime we pass one of the twenty in town. It’s all theory at this point, but it scares me—how a place plus enough time can morph a person wholly. I chuck the chicken again, and it nips his bald spot. Okay, I know I’m more creative than this. My first and only prof—Photography 1 at Napa Valley College—said I had, a wild eye for detail, but no focus. To think I told Dad I’d be out here taking photos. Photos of? Ice? Trucks? “The idler’s set a record,” I say now to my fiancé. “Two hours straight.” He says: nothing. Recently he said this thing while I cooked our quinoa: Man is his God. Meaning, I think, that whatever strikes in us a divine mood—say, the dog’s tongue between your toes—those moments are the foundation of one’s true, unmalleable self. Or maybe it means nothing. Maybe he still believes that because he’s eight years older, everything he says sounds prophetic to my ears. Maybe it did, once. Point is, I should find something new to do—I stew, I swipe, I smoke, I work at Triple Thrift. My Nikon gathers dust above the fridge. Maybe woman is her boredom. “Did you hear me?” I say. “I’m concentrating,” he says, earphones back in, eyes glued to the Mac’s holy glow. 10| PHOEBE 48.2