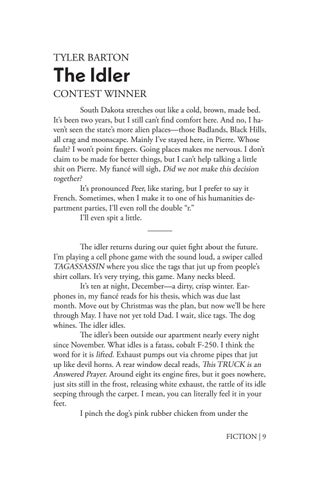 The Idler CONTEST WINNER South Dakota stretches out like a cold, brown, made bed. It’s been two years, but I still can’t find comfort here. And no, I haven’t seen the state’s more alien places—those Badlands, Black Hills, all crag and moonscape. Mainly I’ve stayed here, in Pierre. Whose fault? I won’t point fingers. Going places makes me nervous. I don’t claim to be made for better things, but I can’t help talking a little shit on Pierre. My fiancé will sigh, Did we not make this decision together? It’s pronounced Peer, like staring, but I prefer to say it French. Sometimes, when I make it to one of his humanities department parties, I’ll even roll the double “r.” I’ll even spit a little. ______ The idler returns during our quiet fight about the future. I’m playing a cell phone game with the sound loud, a swiper called TAGASSASSIN where you slice the tags that jut up from people’s shirt collars. It’s very trying, this game. Many necks bleed. It’s ten at night, December—a dirty, crisp winter. Earphones in, my fiancé reads for his thesis, which was due last month. Move out by Christmas was the plan, but now we’ll be here through May. I have not yet told Dad. I wait, slice tags. The dog whines. The idler idles. The idler’s been outside our apartment nearly every night since November. What idles is a fatass, cobalt F-250. I think the word for it is lifted. Exhaust pumps out via chrome pipes that jut up like devil horns. A rear window decal reads, This TRUCK is an Answered Prayer. Around eight its engine fires, but it goes nowhere, just sits still in the frost, releasing white exhaust, the rattle of its idle seeping through the carpet. I mean, you can literally feel it in your feet. I pinch the dog’s pink rubber chicken from under the FICTION | 9