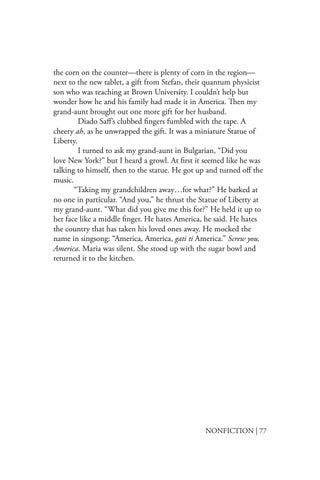 the corn on the counter—there is plenty of corn in the region— next to the new tablet, a gift from Stefan, their quantum physicist son who was teaching at Brown University. I couldn’t help but wonder how he and his family had made it in America. Then my grand-aunt brought out one more gift for her husband. Diado Saff’s clubbed fingers fumbled with the tape. A cheery ah, as he unwrapped the gift. It was a miniature Statue of Liberty. I turned to ask my grand-aunt in Bulgarian, “Did you love New York?” but I heard a growl. At first it seemed like he was talking to himself, then to the statue. He got up and turned off the music. “Taking my grandchildren away…for what?” He barked at no one in particular. “And you,” he thrust the Statue of Liberty at my grand-aunt. “What did you give me this for?” He held it up to her face like a middle finger. He hates America, he said. He hates the country that has taken his loved ones away. He mocked the name in singsong: “America, America, gati ti America.” Screw you, America. Maria was silent. She stood up with the sugar bowl and returned it to the kitchen.