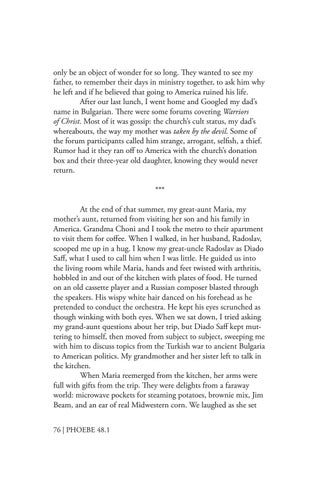 only be an object of wonder for so long. They wanted to see my father, to remember their days in ministry together, to ask him why he left and if he believed that going to America ruined his life. After our last lunch, I went home and Googled my dad’s name in Bulgarian. There were some forums covering Warriors of Christ. Most of it was gossip: the church’s cult status, my dad’s whereabouts, the way my mother was taken by the devil. Some of the forum participants called him strange, arrogant, selfish, a thief. Rumor had it they ran off to America with the church’s donation box and their three-year old daughter, knowing they would never return. *** At the end of that summer, my great-aunt Maria, my mother’s aunt, returned from visiting her son and his family in America. Grandma Choni and I took the metro to their apartment to visit them for coffee. When I walked, in her husband, Radoslav, scooped me up in a hug. I know my great-uncle Radoslav as Diado Saff, what I used to call him when I was little. He guided us into the living room while Maria, hands and feet twisted with arthritis, hobbled in and out of the kitchen with plates of food. He turned on an old cassette player and a Russian composer blasted through the speakers. His wispy white hair danced on his forehead as he pretended to conduct the orchestra. He kept his eyes scrunched as though winking with both eyes. When we sat down, I tried asking my grand-aunt questions about her trip, but Diado Saff kept muttering to himself, then moved from subject to subject, sweeping me with him to discuss topics from the Turkish war to ancient Bulgaria to American politics. My grandmother and her sister left to talk in the kitchen. When Maria reemerged from the kitchen, her arms were full with gifts from the trip. They were delights from a faraway world: microwave pockets for steaming potatoes, brownie mix, Jim Beam, and an ear of real Midwestern corn. We laughed as she set 76 | PHOEBE 48.1