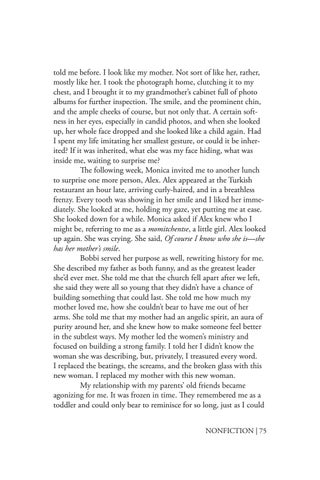 told me before. I look like my mother. Not sort of like her, rather, mostly like her. I took the photograph home, clutching it to my chest, and I brought it to my grandmother’s cabinet full of photo albums for further inspection. The smile, and the prominent chin, and the ample cheeks of course, but not only that. A certain softness in her eyes, especially in candid photos, and when she looked up, her whole face dropped and she looked like a child again. Had I spent my life imitating her smallest gesture, or could it be inherited? If it was inherited, what else was my face hiding, what was inside me, waiting to surprise me? The following week, Monica invited me to another lunch to surprise one more person, Alex. Alex appeared at the Turkish restaurant an hour late, arriving curly-haired, and in a breathless frenzy. Every tooth was showing in her smile and I liked her immediately. She looked at me, holding my gaze, yet putting me at ease. She looked down for a while. Monica asked if Alex knew who I might be, referring to me as a momitchentse, a little girl. Alex looked up again. She was crying. She said, Of course I know who she is—she has her mother’s smile. Bobbi served her purpose as well, rewriting history for me. She described my father as both funny, and as the greatest leader she’d ever met. She told me that the church fell apart after we left, she said they were all so young that they didn’t have a chance of building something that could last. She told me how much my mother loved me, how she couldn’t bear to have me out of her arms. She told me that my mother had an angelic spirit, an aura of purity around her, and she knew how to make someone feel better in the subtlest ways. My mother led the women’s ministry and focused on building a strong family. I told her I didn’t know the woman she was describing, but, privately, I treasured every word. I replaced the beatings, the screams, and the broken glass with this new woman. I replaced my mother with this new woman. My relationship with my parents’ old friends became agonizing for me. It was frozen in time. They remembered me as a toddler and could only bear to reminisce for so long, just as I could NONFICTION | 75