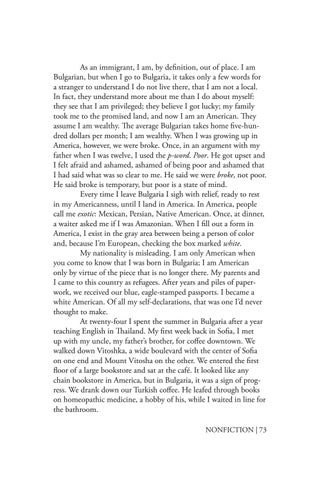 As an immigrant, I am, by definition, out of place. I am Bulgarian, but when I go to Bulgaria, it takes only a few words for a stranger to understand I do not live there, that I am not a local. In fact, they understand more about me than I do about myself: they see that I am privileged; they believe I got lucky; my family took me to the promised land, and now I am an American. They assume I am wealthy. The average Bulgarian takes home five-hundred dollars per month; I am wealthy. When I was growing up in America, however, we were broke. Once, in an argument with my father when I was twelve, I used the p-word. Poor. He got upset and I felt afraid and ashamed, ashamed of being poor and ashamed that I had said what was so clear to me. He said we were broke, not poor. He said broke is temporary, but poor is a state of mind. Every time I leave Bulgaria I sigh with relief, ready to rest in my Americanness, until I land in America. In America, people call me exotic: Mexican, Persian, Native American. Once, at dinner, a waiter asked me if I was Amazonian. When I fill out a form in America, I exist in the gray area between being a person of color and, because I’m European, checking the box marked white. My nationality is misleading. I am only American when you come to know that I was born in Bulgaria; I am American only by virtue of the piece that is no longer there. My parents and I came to this country as refugees. After years and piles of paperwork, we received our blue, eagle-stamped passports. I became a white American. Of all my self-declarations, that was one I’d never thought to make. At twenty-four I spent the summer in Bulgaria after a year teaching English in Thailand. My first week back in Sofia, I met up with my uncle, my father’s brother, for coffee downtown. We walked down Vitoshka, a wide boulevard with the center of Sofia on one end and Mount Vitosha on the other. We entered the first floor of a large bookstore and sat at the café. It looked like any chain bookstore in America, but in Bulgaria, it was a sign of progress. We drank down our Turkish coffee. He leafed through books on homeopathic medicine, a hobby of his, while I waited in line for the bathroom. NONFICTION | 73