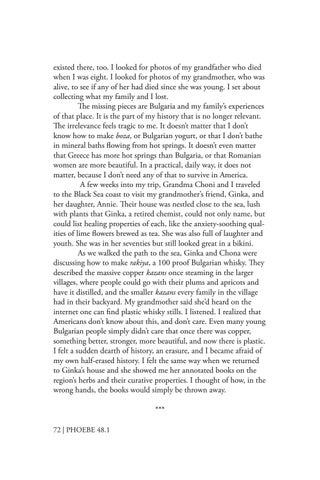 existed there, too. I looked for photos of my grandfather who died when I was eight. I looked for photos of my grandmother, who was alive, to see if any of her had died since she was young. I set about collecting what my family and I lost. The missing pieces are Bulgaria and my family’s experiences of that place. It is the part of my history that is no longer relevant. The irrelevance feels tragic to me. It doesn’t matter that I don’t know how to make boza, or Bulgarian yogurt, or that I don’t bathe in mineral baths flowing from hot springs. It doesn’t even matter that Greece has more hot springs than Bulgaria, or that Romanian women are more beautiful. In a practical, daily way, it does not matter, because I don’t need any of that to survive in America. A few weeks into my trip, Grandma Choni and I traveled to the Black Sea coast to visit my grandmother’s friend, Ginka, and her daughter, Annie. Their house was nestled close to the sea, lush with plants that Ginka, a retired chemist, could not only name, but could list healing properties of each, like the anxiety-soothing qualities of lime flowers brewed as tea. She was also full of laughter and youth. She was in her seventies but still looked great in a bikini. As we walked the path to the sea, Ginka and Chona were discussing how to make rakiya, a 100 proof Bulgarian whisky. They described the massive copper kazans once steaming in the larger villages, where people could go with their plums and apricots and have it distilled, and the smaller kazans every family in the village had in their backyard. My grandmother said she’d heard on the internet one can find plastic whisky stills. I listened. I realized that Americans don’t know about this, and don’t care. Even many young Bulgarian people simply didn’t care that once there was copper, something better, stronger, more beautiful, and now there is plastic. I felt a sudden dearth of history, an erasure, and I became afraid of my own half-erased history. I felt the same way when we returned to Ginka’s house and she showed me her annotated books on the region’s herbs and their curative properties. I thought of how, in the wrong hands, the books would simply be thrown away. *** 72 | PHOEBE 48.1