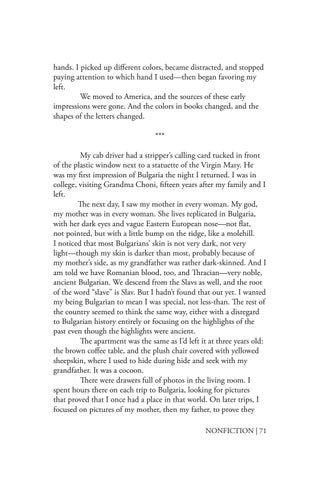 hands. I picked up different colors, became distracted, and stopped paying attention to which hand I used—then began favoring my left. We moved to America, and the sources of these early impressions were gone. And the colors in books changed, and the shapes of the letters changed. *** My cab driver had a stripper’s calling card tucked in front of the plastic window next to a statuette of the Virgin Mary. He was my first impression of Bulgaria the night I returned. I was in college, visiting Grandma Choni, fifteen years after my family and I left. The next day, I saw my mother in every woman. My god, my mother was in every woman. She lives replicated in Bulgaria, with her dark eyes and vague Eastern European nose—not flat, not pointed, but with a little bump on the ridge, like a molehill. I noticed that most Bulgarians’ skin is not very dark, not very light—though my skin is darker than most, probably because of my mother’s side, as my grandfather was rather dark-skinned. And I am told we have Romanian blood, too, and Thracian—very noble, ancient Bulgarian. We descend from the Slavs as well, and the root of the word “slave” is Slav. But I hadn’t found that out yet. I wanted my being Bulgarian to mean I was special, not less-than. The rest of the country seemed to think the same way, either with a disregard to Bulgarian history entirely or focusing on the highlights of the past even though the highlights were ancient. The apartment was the same as I’d left it at three years old: the brown coffee table, and the plush chair covered with yellowed sheepskin, where I used to hide during hide and seek with my grandfather. It was a cocoon. There were drawers full of photos in the living room. I spent hours there on each trip to Bulgaria, looking for pictures that proved that I once had a place in that world. On later trips, I focused on pictures of my mother, then my father, to prove they NONFICTION | 71