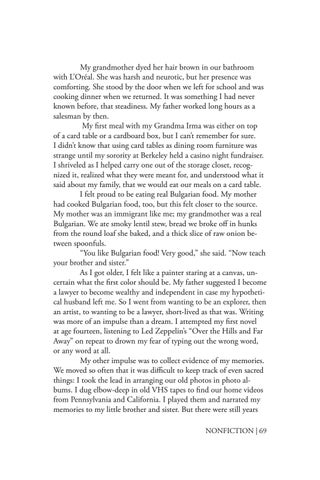 My grandmother dyed her hair brown in our bathroom with L’Oréal. She was harsh and neurotic, but her presence was comforting. She stood by the door when we left for school and was cooking dinner when we returned. It was something I had never known before, that steadiness. My father worked long hours as a salesman by then. My first meal with my Grandma Irma was either on top of a card table or a cardboard box, but I can’t remember for sure. I didn’t know that using card tables as dining room furniture was strange until my sorority at Berkeley held a casino night fundraiser. I shriveled as I helped carry one out of the storage closet, recognized it, realized what they were meant for, and understood what it said about my family, that we would eat our meals on a card table. I felt proud to be eating real Bulgarian food. My mother had cooked Bulgarian food, too, but this felt closer to the source. My mother was an immigrant like me; my grandmother was a real Bulgarian. We ate smoky lentil stew, bread we broke off in hunks from the round loaf she baked, and a thick slice of raw onion between spoonfuls. “You like Bulgarian food! Very good,” she said. “Now teach your brother and sister.” As I got older, I felt like a painter staring at a canvas, uncertain what the first color should be. My father suggested I become a lawyer to become wealthy and independent in case my hypothetical husband left me. So I went from wanting to be an explorer, then an artist, to wanting to be a lawyer, short-lived as that was. Writing was more of an impulse than a dream. I attempted my first novel at age fourteen, listening to Led Zeppelin’s “Over the Hills and Far Away” on repeat to drown my fear of typing out the wrong word, or any word at all. My other impulse was to collect evidence of my memories. We moved so often that it was difficult to keep track of even sacred things: I took the lead in arranging our old photos in photo albums. I dug elbow-deep in old VHS tapes to find our home videos from Pennsylvania and California. I played them and narrated my memories to my little brother and sister. But there were still years NONFICTION | 69