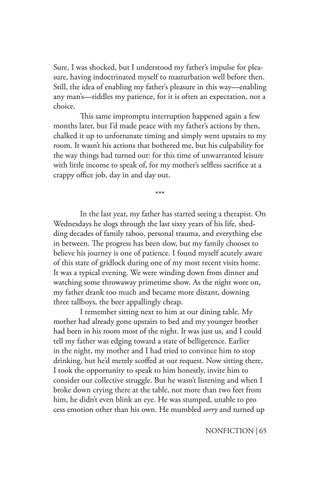 Sure, I was shocked, but I understood my father’s impulse for pleasure, having indoctrinated myself to masturbation well before then. Still, the idea of enabling my father’s pleasure in this way—enabling any man’s—riddles my patience, for it is often an expectation, not a choice. This same impromptu interruption happened again a few months later, but I’d made peace with my father’s actions by then, chalked it up to unfortunate timing and simply went upstairs to my room. It wasn’t his actions that bothered me, but his culpability for the way things had turned out: for this time of unwarranted leisure with little income to speak of, for my mother’s selfless sacrifice at a crappy office job, day in and day out. *** In the last year, my father has started seeing a therapist. On Wednesdays he slogs through the last sixty years of his life, shedding decades of family taboo, personal trauma, and everything else in between. The progress has been slow, but my family chooses to believe his journey is one of patience. I found myself acutely aware of this state of gridlock during one of my most recent visits home. It was a typical evening. We were winding down from dinner and watching some throwaway primetime show. As the night wore on, my father drank too much and became more distant, downing three tallboys, the beer appallingly cheap. I remember sitting next to him at our dining table. My mother had already gone upstairs to bed and my younger brother had been in his room most of the night. It was just us, and I could tell my father was edging toward a state of belligerence. Earlier in the night, my mother and I had tried to convince him to stop drinking, but he’d merely scoffed at our request. Now sitting there, I took the opportunity to speak to him honestly, invite him to consider our collective struggle. But he wasn’t listening and when I broke down crying there at the table, not more than two feet from him, he didn’t even blink an eye. He was stumped, unable to pro cess emotion other than his own. He mumbled sorry and turned up NONFICTION | 65