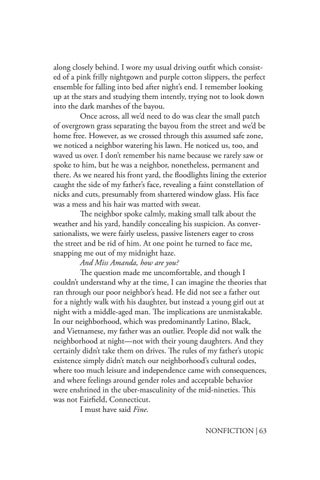 along closely behind. I wore my usual driving outfit which consisted of a pink frilly nightgown and purple cotton slippers, the perfect ensemble for falling into bed after night’s end. I remember looking up at the stars and studying them intently, trying not to look down into the dark marshes of the bayou. Once across, all we’d need to do was clear the small patch of overgrown grass separating the bayou from the street and we’d be home free. However, as we crossed through this assumed safe zone, we noticed a neighbor watering his lawn. He noticed us, too, and waved us over. I don’t remember his name because we rarely saw or spoke to him, but he was a neighbor, nonetheless, permanent and there. As we neared his front yard, the floodlights lining the exterior caught the side of my father’s face, revealing a faint constellation of nicks and cuts, presumably from shattered window glass. His face was a mess and his hair was matted with sweat. The neighbor spoke calmly, making small talk about the weather and his yard, handily concealing his suspicion. As conversationalists, we were fairly useless, passive listeners eager to cross the street and be rid of him. At one point he turned to face me, snapping me out of my midnight haze. And Miss Amanda, how are you? The question made me uncomfortable, and though I couldn’t understand why at the time, I can imagine the theories that ran through our poor neighbor’s head. He did not see a father out for a nightly walk with his daughter, but instead a young girl out at night with a middle-aged man. The implications are unmistakable. In our neighborhood, which was predominantly Latino, Black, and Vietnamese, my father was an outlier. People did not walk the neighborhood at night—not with their young daughters. And they certainly didn’t take them on drives. The rules of my father’s utopic existence simply didn’t match our neighborhood’s cultural codes, where too much leisure and independence came with consequences, and where feelings around gender roles and acceptable behavior were enshrined in the uber-masculinity of the mid-nineties. This was not Fairfield, Connecticut. I must have said Fine. NONFICTION | 63